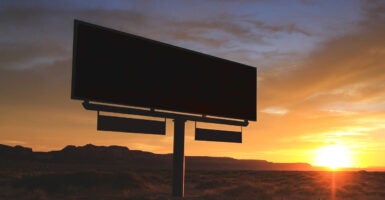 GoFundMe, the private fundraising website, has halted the ability of a group of parents to raise money for a giant billboard that would expose transgender disinformation. (Photo: Joel Sharpe/Getty Images)

GoFundMe, the private fundraising website, has halted the ability of a group of parents to raise money for a giant billboard that would expose transgender disinformation. GoFundMe claims the fundraising efforts violated its user rules.

Parents wanted to erect a billboard that says, “Puberty is not a medical condition,” along with a graphic of Abigail Shrier’s book, “Irreversible Damage: The Transgender Craze Seducing Our Daughters.”

The fundraising effort is similar to one by a Los Angeles-area father, who had paid for a similar billboard following his teenage daughter’s struggle with gender dysphoria.

That billboard in West Hollywood states: “Your child is learning about gender identity in school. Puberty is not a medical condition. Get the facts. Read this book.”

It makes sense that parents would target California, specifically. California is one of the most pro-transgender states in the country. This last legislative session, California lawmakers passed multiple pro-transgender bills, one of which subsidized taxpayer dollars for a health care fund to help transgender people pay for various hormone replacement therapies and gender confirmation surgeries.

Wall Street Journal columnist and author Shrier’s work exposing the trend of teenage girls interested in being transgender, almost entirely due to what she found was a peer contagion, is prolific and timely.

While on Joe Rogan’s podcast, Shrier explained how she became aware of this topic and how damaging it is specifically for young girls to transition through hormones or surgery. She revealed that Amazon had censored her book and wouldn’t allow publishers’ ads.

“I think in America we have a weakness for things that get cloaked in civil rights,” she told Rogan, explaining how the transgender trend has become a hot-button issue among girls, doctors, and the LGBT community alike.

Lisa Littman originally published research revealing this thesis at Brown University. It was heavily censored, and she was bullied into eventually removing it.

Of course, GoFundMe, like many influential webpages, is a private company and can do whatever it wants. In fact, it does. GoFundMe has an entire page dedicated to the LGBT community, with suggestions about how to facilitate fundraisers for “gender confirmation” surgery and the like.

Although GoFundMe is free to post what it wants, it should be clear about its anti-conservative or anti-traditional bias. “Fundraising for the people and causes you care about” might be its slogan, but this isn’t actually the case—it’s clearly selective.

Taking down fundraising campaigns some people do care about, especially ones that highlight a conservative worldview or something that appears countercultural, like a book that exposes transgender myths, is the epitome of censorship via Big Tech.