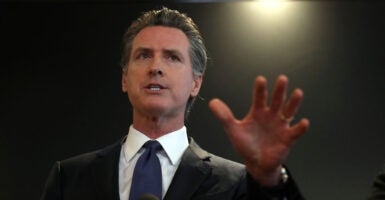 While a pandemic has swept the country and wildfires rage through the West, California’s leadership and Legislature are spearheading a movement to ensure that the state is enslaved to identity politics. This is a harbinger of things to come across the entire country.

No one policy or bill exposes California’s far-left agenda. But taken together, it appears the state’s lawmakers have passed enough provisions in the past year alone to create a tidal wave of progressive thought.

These measures are becoming strong enough to push everyone away from the concepts of individualism, personal responsibility, and limited government, and headlong toward identity politics.

Some laws sound slightly benign, but demonstrate a severe overreach into California’s businesses. Last month, the Legislature mandated that by New Year’s Eve 2021 at least one director of publicly traded companies that originated in California has to be a minority or LGBTQ.

The same applies in California for organizations with large boards. On Sept. 30, California’s Gov. Gavin Newsom signed a law requiring that one-third of boards with nine or more members have three minorities sitting on it by next year. The Wall Street Journal reports “the new quota is the first of its kind in the U.S.,” provided the governor approves.

Some bills are directly situated to enshrine identity politics into California’s core being. Being LGBTQ is now revered as a Golden State status symbol. Just a few days ago, Newsom signed a bill establishing “the Transgender Wellness and Equity Fund, for the purpose of funding grants” in order to “create programs, or [continue] funding existing programs, focused on coordinating trans-inclusive health care.”

Although only about 200,000 transgender individuals live in California, a miniscule percentage of the state’s population, the bill is solely for transgender, gender-nonconforming, or intersex individuals, or TGI, to use for their own health care.

The law allows for taxpayer dollars to go toward grants to “TGI-serving organizations for the purpose of increasing the capacity of health care professionals to effectively provide TGI health care and institute TGI-inclusive best practices.”

That’s not the only pro-transgender bill signed into law this session. Newsom recently signed a law requiring California to house transgender inmates in prisons based on gender identity, not biological sex.

You don’t have to be a rabid right-winger to come to the conclusion that this is a devastating thing to do to biological women who are incarcerated. Yet, according to California lawmakers, it must be done in the name of identity politics.

Identity politics is most definitely being enshrined into California’s education system. In August, Newsom signed legislation that requires any undergraduates in the California state university system to take an “ethnic studies” course. High school students soon will face the same requirement, if some get their way.

Following George Floyd’s May 25 death in Minneapolis and the riots that followed, California lawmakers proposed legislation to clamp down on law enforcement. Not because of any relevant data showcasing an increase in unnecessary cop-related homicides, but simply because of the fact that the Black Lives Matter movement dominated the news cycle.

Both of these measures seem to be unnecessary state overreach—and issues that should be handled by local government. But that wouldn’t advance the state’s embrace of identity politics.

California long has been a state where entertainment reigns. But there’s nothing frivolous or entertaining about its venture into identity politics. These provisions are reaching all aspects of residents’ lives, from the way laws are enforced to how businesses are allowed to operate; from how tax dollars are spent to what students are taught.

If the state were an isolated country, it would be easy to let it slide into another Gomorrah. But oftentimes the rest of the country follows California’s lead.

So far, the example it is setting doesn’t look good.