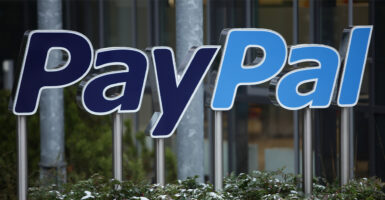 Confronting hate and extremism is a laudable goal, but conservatives should be wary that PayPal's partner, the leftist Anti-Defamation League, will call the shots on who stays and who goes online. (Photo: Sean Gallup/Getty Images)

PayPal, the payment processing company, recently announced it will partner with the Anti-Defamation League to identify “extremist” groups that will be denied service.

All of us, including in the private sector, have a critical role to play in fighting the spread of extremism and hate. … We have a unique opportunity to further understand how hate spreads and develop key insights that will inform the efforts of the financial industry, law enforcement, and our communities in mitigating extremist threats.

But although confronting hate and extremism is a laudable goal, conservatives should be wary of a known leftist actor such as the Anti-Defamation League calling the shots on who stays and who goes online.

The development harkens back to similar incidents such as the leftist Southern Poverty Law Center’s identification of “hate groups” for Amazon and the charity tracker GuideStar.

Greenblatt, the ADL’s leader, served in the Obama White House as a special assistant to the president. His tenure has seen the ADL morph from a group dedicated to fighting antisemitism into a group defined by rigid adherence to radical leftist ideology.

Perhaps the most infamous indication of its transformation from respected civil rights group to leftist puppet came in 2019, when the ADL listed the “OK” hand sign as a symbol of white supremacy. It would have been hilarious if the announcement didn’t result in story after story after story of people getting fired or losing opportunities based on perceived racism from a symbol that no rational human being could construe as bigoted.

It should come as no surprise that leftist groups such as the ADL are beginning to target conservative groups’ ability to spend their own money. It’s the natural evolution in a coordinated campaign to expunge content they don’t like from polite society.

“How harmful is YouTube?” starts a report from the ADL on extremist content on the video platform. The report argues that YouTube is the gateway to hate:

Overall, our findings indicate that YouTube plays an important role in exposing people to potentially harmful content. … These findings are cause for significant concern given the high levels of racial resentment that viewers express and the potential effects of the videos they see.

Greenblatt then used his organization’s report to call for YouTube to engage in mass censorship, a demand that the company has shown it is willing to heed.

“Tech platforms including YouTube must take further action to ensure that extremist content is scrubbed from their platforms,” said Greenblatt, “and if they do not, then they should be held accountable when their systems, built to engage users, actually amplify dangerous content that leads to violence.”

The process starts with censorship, then moves to outright refusal to allow access to the rest of society. And the left has tested the waters on banning payments before.

In March, GoFundMe took down the donations page for a women’s rape crisis center in Vancouver, British Columbia, that had crowdfunded $7,000. The reason? It was started by “Super-Straight,” an internet community critical of transgenderism.

The implications of locking an entire political philosophy out of the financial system are staggering. Society cannot function when only one side of the aisle is allowed to participate.

There’s an old retort often used by leftists on the internet when those on the right bring up concerns with the encroaching tide of censorship and deplatforming: “Don’t like it? Build your own.”

But where does this chain of “building your own” end? Is it realistic to create two entirely different financial and social ecosystems based exclusively on politics? Should there be a conservative YouTube, funded by a conservative PayPal, powered by conservative electricity?

In a healthy society, no. But the current tech landscape does not afford conservatives that luxury.

Americans should support companies such as Rumble and Gettr that explicitly court conservatives spurned by other platforms. When given the choice between a business that actively attempts to eliminate your political philosophy and one that caters to it, it makes little sense to go with the former.

In an ideal world, none of us would have an issue with disparate political philosophies existing on the same platforms. But that is not where we are right now.

By flexing our wallets, conservatives can show PayPal and like-minded companies that alienating consumers based on politics has financial consequences.

After all, our money is just as good as the liberals’.

Have an opinion about this article? To sound off, please email letters@DailySignal.com and we’ll consider publishing your edited remarks in our regular “We Hear You” feature. Remember to include the url or headline of the article plus your name and town and/or state..