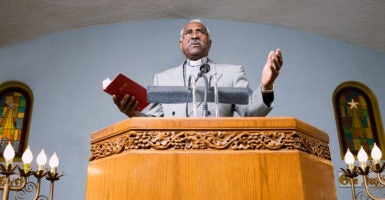 Two U.S. congressmen have introduced a bill that would expand the ability of pastors to comment on political matters. (Photo: Hill Street Studios Blend Images/Newscom)

In an effort to give faith communities and nonprofits a voice in the political sphere, two U.S. congressmen have introduced a bill that would expand the ability of these institutions to comment on political matters.

“The reason I am bringing this legislation forward is that for decades now the Johnson Amendment has limited the ability for a lot of churches and other religious organizations and nonprofits to express their views and to exercise their free speech rights,” Scalise said at a news conference Sept. 28 introducing the bill.

The Johnson Amendment was proposed in 1954 by then-Sen. Lyndon B. Johnson. It changed the U.S. tax code to curb select tax-exempt organizations’ ability to comment on political candidates.

“For over 60 years, the Johnson Amendment from 1954 has targeted pastors and churches in the nation using the tax-exempt status as leverage,” Hice said at the news conference, adding that he has been “personally involved” with this issue for almost 10 years as a pastor.

“When government acts as a gatekeeper of free speech and what free speech ought to be, then it has abridged our free speech rights,” he said.

While this bill would be a significant change if enacted, it comes with two specific stipulations.

According to a press release from Alliance Defending Freedom, the first stipulation is that political statements must be “made in the ordinary course of the organization’s regular and customary activities in carrying out its exempt purpose.”

The second is that any expenditure related to political statements must be minimal. As an example, the press release says: “If a charity normally sends out a monthly newsletter related to its core purpose, the bill allows them to occasionally include comments on political issues, or candidates. They would not, however, be allowed to create an entirely new direct mail campaign solely for political information.”

The bill, however, “does not allow nonprofits to become political operatives or fronts for political operations,” Tony Perkins, president of the Family Research Council, said at the bill’s unveiling.

For example, pastors could make statements and endorsements but cannot front for a political operation—meaning pastors could not turn tax-exempt money into political funds, Perkins said.

Since the institution of the Johnson Amendment, churches and nonprofits have faced the risk of losing their tax-exempt status over political comments.

“The Johnson Amendment has allowed the left to embellish and to misguide and to cloud the issue and, therefore, intimidate many pastors into silence,” said Perkins. “This is about restoring the full speech rights of all nonprofits and we are eager to see this measure go forward.”

According to Alliance Defending Freedom, the initiative of Scalise and Hice came in part with the creation of the Political Activities Referral Committee by the IRS. This committee’s purpose was to single out churches who had any “potential impermissible political campaign intervention activities.”

“The IRS has chosen to operate basically behind a veil of secrecy,” Christiana Holcomb, legal counsel for Alliance Defending Freedom, said at the press conference.

“It has told atheist organizations like the Freedom From Religion Foundation that it has investigated 99 churches but has refused to inform us, the public, or even the churches themselves who is being investigated and under what circumstances and for what potential violations,” she added.

Holcomb said in 2014 that Alliance Defending Freedom issued a Freedom of Information Act request to the IRS asking for information on the churches that had been singled out as well as details on the new procedures that the IRS claims to have for auditing churches.

The IRS refused to respond, she said. After six months of waiting, Alliance Defending Freedom filed a federal lawsuit, which has been pending for over a year now with no resolution.

“Government bureaucrats should not be bouncers at the doorway to freedom of speech and freedom of religion,” Perkins said. “And that is essentially what the IRS has become under this administration.”

Roger Severino, director of the DeVos Center for Religion and Civil Society at The Heritage Foundation, said this bill is a good way for faith communities to regain ground that was lost with the Johnson Amendment.

“Secularist groups have wielded the Johnson Amendment like a club to intimidate people of faith out of exercising their First Amendment rights for far too long,” Severino told The Daily Signal. “The Johnson Amendment was never intended to muzzle religious organizations. Preachers should not face IRS investigations and punishment for speaking to their congregations about their faith, whether or not it touches on the politics of the day.”

Hice and Scalise do not expect this bill to move forward this year but hope it’ll help frame political discussion.