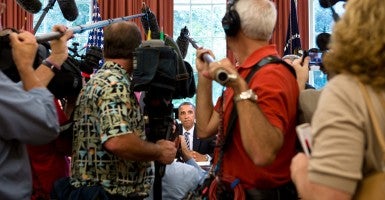 A coalition of 38 journalism advocacy groups penned an open letter to President Obama urging him to better foster transparency and curb systemic censorship within his administration and the federal government.

Released yesterday, the letter chastised the president for failing to live up to his own promises, and endangering the critical role of a free press in a free society.

“The stifling of expression is happening,” the letter states, “despite your pledge on your first day in office to bring ‘a new era of openness.’”

>>> Vote of No Confidence: Americans Have Little Faith in Media

The coalition characterized “these restrictions a form of censorship—an attempt to control what the public is allowed to see and hear.”

David Cuillier, president of the Society of Professional Journalist, heralded the letter as a historic development. In a press release, Cuillier wrote that “Never before has such a broad-based coalition of journalism and good-governance organizations spoken out on this issue.”

This sentiment resonates with Geoffrey Lysaught, group vice president of strategic communications at The Heritage Foundation. Lysaught explained that the administration’s continued “efforts to hide the facts for political gain” threatens the existence of free society.

Though sympathetic, Lysaught doubts the efficacy of the coalition’s mild diplomatic approach. Instead, he called on journalists to “take on big government and tell the truth.”

“The question is not whether Obama will acquiesce it’s whether media leaders and journalist will have the courage to take him on in public,” Lysaught said.