This Senate Candidate Was Asked If She Voted for Obama. She Refused to Answer. 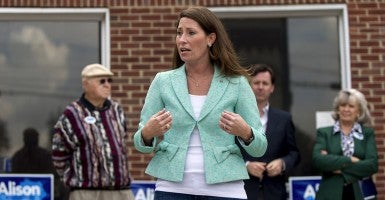 In trying to convince voters to unseat Senate Minority Leader Mitch McConnell, his Democratic challenger has worked to distance herself from President Obama.

In a meeting yesterday with the Louisville Courier-Journal’s editorial board, Alison Lundergan Grimes persistently declined to tell Kentucky voters whether she voted for the president in 2008 and 2012.