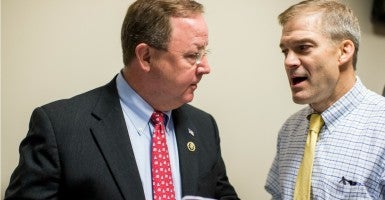 The largest Republican caucus in Congress has thrown its weight behind a proposal to reduce spending significantly and scrap a 2015 budget deal.

With that move, the conservative-leaning Republican Study Committee brings additional urgency to an ongoing budget battle in Congress.

But conservatives, and now the House’s Republican Study Committee, want to renounce that agreement.

The committee, with more than 170 Republican lawmakers as members, is pushing to cut $30 billion from the $1.07 trillion established in the Boehner-Obama budget deal.

We must make concrete spending reductions, either in non-defense discretionary spending or through enacted mandatory savings, to offset any spending in excess of $1.04 trillion.

Ryan, R-Wis., has indicated that reneging on the Boehner-Obama spending agreement likely would throw the House off track and scuttle his efforts to achieve regular order during the appropriations process.

Flores told The Daily Signal as much in an interview last month.

“If you want to get the appropriations bills done [one at a time through regular order], the numbers in the October budget deal are the ones that’ll be used,” he said.

Talk of process and returning to regular order came into vogue when Ryan succeeded Boehner as speaker in late October.

Rather than funding the government through a single “omnibus” spending package, Ryan wants Congress to pass a dozen individual spending bills to fund specific government agencies and programs.

The ranks of the Republican Conference Committee swell past 170 of the 246 Republican members of the House. Its opposition could tip the balance of the debate.

Scrapping the Boehner-Obama spending levels could lead to another catchall omnibus budget bill at the end of the year.