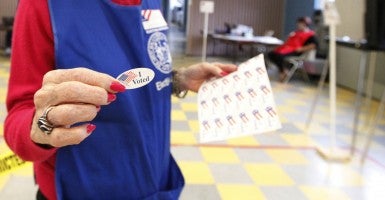 Marketed as “The Voter’s Self-Defense System,” Vote Smart is a group of conservatives and liberals who have compiled thousands of hours of detailed research into every candidate and incumbent running for office.

“Vote Smart was put together to assist voters who are confused or even cynical with unbiased information about candidates,” said Adelaide Elm, a board member and senior adviser to Vote Smart. “We want information to be accessible for average citizens rather than just political junkies.”

“Candidates are applying for a job,” Vote Smart President Richard Kimball told The Daily Signal. “We force candidates to fill out an application for a job, just like we do.”

The new features include:

Vote Smart promises to be unbiased, non-partisan of facts about candidates.

Kimball said this dedication is evidenced by his friendship with Sen. John McCain, whom he once ran against as the Democratic nominee for U.S. Senate from Arizona. Before their final debate, Kimball was advised to “attack” McCain, something he didn’t want to do.

“He went through five-and-a-half years of hell,” Kimball said of the former POW. “I have incredible respect for him. I admire the guy; I didn’t want to attack him.”

Kimball instead used the time to tell voters how campaign money is spent on three things—market analysis of voters, consultants and media time. Whoever can use these most effectively to “bombard voters with emotional nonsense” wins.

“Somewhere, politicians decided it was more efficient to move us emotionally rather than persuade us intellectually,” said Kimball. Most of Vote Smart’s research is done by unpaid interns and volunteers, who are rewarded with housing at Vote Smart’s Montana ranch.

Volunteers are greeted by signs all over the office that say, “Check your politics at the door.”

Elm said she is inspired by the volunteers and that there has been no need to ask them to disclose their personal politics.

“It’s uplifting to see how much integrity they have,” said Elm.

In an interview with the The Daily Signal, Kimball emphasized that it is necessary for a free people to have access to factual information about their leaders:

“Thomas Jefferson once said that ‘if a nation expects to be ignorant and free, it expects what never was and never will be.’ Our founding was a huge enterprise. The Founders took a chance. Everybody else in the world thought we were nuts. But somehow it worked, because they knew information was power.

“We can only put the information out there. We don’t advertise; we don’t have the budget. We just hope people tell people.”