How Noncitizens Can Swing Elections (Without Even Voting Illegally) 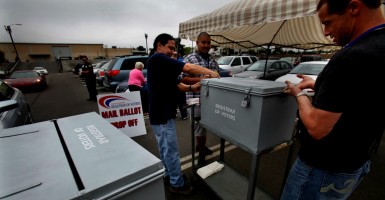 Most election officials are not taking the steps necessary to detect or stop voter fraud. (Photo: Peggy Peattie/Zuma Press/Newscom)

In an article in Politico, Mark Rozell, acting dean of the School of Policy, Government, and International Affairs at George Mason University, and Paul Goldman, a weekly columnist for the Washington Post, point out a fact that should greatly concern all Americans: that the presence of millions of noncitizens, both legal and illegal, could tilt the presidential election toward the Democrat Party and decide the election in favor of the eventual Democratic nominee.

As I have outlined in many different articles and a recent book on voter fraud, illegal voting by noncitizens is a growing problem. Most election officials are not taking the steps necessary to detect or stop it, and many prosecutors including the current Justice Department seem reluctant to prosecute it.

A study released in 2014 by three professors at Old Dominion and George Mason Universities in Virginia concluded that 6.4 percent of the noncitizen population voted illegally in the 2008 election, enough to have changed the outcome of various contests in a number of states.

That includes the winner of North Carolina’s electoral votes, which went to Barack Obama by a relatively small margin, since a majority of foreign-born residents favor the Democratic Party. That may also be why Virginia Gov. Terry McAuliffe, the governor of a battleground state, vetoed a bill that would have required jury commissioners to provide local election officials with the names of individuals called for jury duty from the state’s voter registration list who were excused for not being U.S. citizens.

Some States Have Congressional Districts They Shouldn’t Have

But as Rozel and Goldman accurately point out, noncitizens may be changing the outcome of presidential elections even without voting illegally. This is related to the problem of some states having more representatives in Congress than they should, and others being shortchanged unfairly due to the huge—and growing—population of illegal aliens whom the Obama administration and its political allies want to provide permanent amnesty.

All of this stems from the way apportionment is conducted. There are 435 members of the U.S. House of Representatives. Under Sec. 2 of Article I of the Constitution and Sec. 2 of the Fourteenth Amendment, every ten years, after the “Enumeration” (the Census), we redistribute those 435 seats based on the “whole number of persons in each State.” In other words, the number of members of the House that each state gets is based on the total population of each state relative to the total population of the U.S., which includes noncitizens. Thus, the upwards of 12 million illegal aliens present in the U.S., combined with other aliens who are here legally but are not citizens and have no right to vote, distort representation in the House.

Various studies have been done on the effects of this distortion, including by Leonard Steinhorn of American University and scholars at Texas A&M University and the Center for Immigration Studies. If you calculate the results based on the latest Census numbers, according to Steinhorn, ten states each are short a congressional seat that they would otherwise have if apportionment were based on citizen population: Indiana, Iowa, Louisiana, Michigan, Missouri, Montana, North Carolina, Ohio, Oklahoma, and Pennsylvania.

States with large numbers of illegal aliens and other noncitizens have congressional seats they otherwise would not have (and should not be entitled to): California (five seats), Florida (one seat), New York (one seat), Texas (two seats), and Washington State (one seat).

This is fundamentally unfair, because these states are benefiting from illegal conduct and gaining political representation for individuals who have no entitlement to such representation or to even be present in the country.

How Noncitizens Affect The Electoral College

This also twists our presidential election process. Under our Electoral College system as laid out in Article II, Sec. 1, the number of electors that each state receives is a combination of its two senators and the number of representatives it has in the House (the one exception is the District of Columbia, which gets three votes courtesy of the Twenty-Third Amendment). Thus, states like California have more Electoral College votes than they should, while other states like Indiana, Michigan, and Ohio are shorted in their Electoral College votes.

As Goldman and Rozell say, this “math gives strongly Democratic states an unfair edge in the Electoral College.” When you look at the makeup of the states that have lost/gained Electoral College votes and what would happen if apportionment were based on citizen population, then:

Four electoral votes may seem minimal, but we have had a number of presidential elections in our history decided by a very small margin, such as the 1876 race between Rutherford Hayes and Samuel Tilden, which was decided by one electoral vote: 185 to 184. The 2000 race was decided by only a slightly higher margin: Bush (271) vs. Gore (266).

Goldman and Rozell point out that Romney won 24 states in 2012. Three battleground states important to Obama’s victory were Florida, Ohio, and Virginia, which have 60 combined electoral votes. If Romney had won these states, too, he would still have had only 266 electoral votes, four short of the 270 needed to win. But according to Goldman and Rozell, if the Electoral College were apportioned according to citizens, then if Romney had won Florida, Ohio, and Virginia, the electoral votes of those states combined with the other 24 Romney won would have given him the 270 votes needed to be president.

The misallocation of electoral votes in apportionment gives Democrats a clear advantage. “This is why counting illegal immigrants and noncitizens significantly reduces the chances of the GOP winning the presidency.”

No one doubts that we should count noncitizens, whether they are here legally or illegally, in the Census, so that we have an accurate count of the population of the U.S. for a myriad of sound public policy reasons. But as Goldman and Rozell say, there is no “persuasive reason to allow the presence of illegal immigrants, unlawfully in the country, or noncitizens generally, to play such a crucial role in picking a president.”

It is a felony under federal law for a noncitizen to vote in our elections because voting is a right given only to American citizens. It is a precious right that must be earned by becoming a citizen. Giving aliens, particularly those whose first act was to break our laws to illegally enter the country, political power in Congress and allowing them to help choose our president strike at the very heart of our republic and what it means to be an American.