Election Results Show There Is No One ‘Hispanic’ Vote 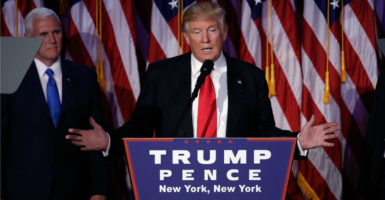 Generalizing about Hispanic votes, or even Cuban-Americans ones, is fool’s gold. Better to appeal to all Americans with good policies, rather than look at the country as a mosaic of groups. (Photo: Mike Segar /Reuters/Newscom)

As is well known, this election will start, not end, months or years of probing existential debates for conservatives and liberals. But one trope both sides can discard early is that there is a “Hispanic” vote. As Florida demonstrated, it doesn’t exist.

There is a Mexican-American vote, a Puerto Rican vote, and a Cuban-American vote, and so on. Even those are gross generalizations that hide important regional and generational differences. And of course, many members of these groups stubbornly refuse to revert to stereotype. But for the moment these ethnic groups will do.

People will parse exit polls over the next few weeks, and we will learn more about the vote. But it should be clear that anyone who went on ad infinitum over the past few weeks about a “Hispanic surge in Florida” that would overcome Donald Trump’s strength with working white voters and help Hillary Clinton—as The New York Times said on the eve of the election—was talking hooey.

About the only group of people who benefit from the belief that there is a unified Hispanic personae—politically or culturally—are those who work at groups like La Raza, which live off the fiction that it exists, or the hope that one will come into being.

That may well be in the future, but as of now, different ethnic groups are motivated by different factors. Mexican-Americans, it appears, punished Trump for saying that Mexico sends us “rapists.” But most of that took place in states out west. In Florida, people of Mexican origin comprised only 15 percent of the “Hispanic” population as of the last Census.

On Oct. 12, Cuban-Americans who are veterans of the failed Bay of Pigs invasion in 1961, the Brigade 2506, gave Trump its first presidential endorsement in its 55-year history.

That was enough to turn a 33-41 deficit for Trump among Cuban-Americans into a 52-42 lead in late October, according to a New York Times/Siena poll that said, “Cubans come home to Trump.” And that’s important, as Cubans continue to comprise the lion’s share of the Hispanic population with 30 percent in Florida.

Puerto Ricans, who are important not just in the Northeast but in the area of Florida between Tampa and Daytona Beach as well, may not have wanted to punish either candidate too much.

The so-called “I-4 corridor,” named after the interstate highway that links those two cities, has a population of some 8 million, as big as Virginia’s. About 1 million are estimated to be Puerto Ricans who fled the island’s dire economic situation. Since they are American citizens, they get to vote as soon as they arrive.

Bill Clinton has courted the Puerto Rican vote for decades, and Hillary Clinton went all out to get them. Her campaign ran radio ads in Orlando that were not just in Spanish, but with voices in a Puerto Rican accent. While she may have won many of those votes, clearly it wasn’t enough to win the state.

Amparo Vargas, a Puerto Rican resident of Kissimmee, typified the general ambivalence when she told the Associated Press in September, “She’s a liar. I have no trust in Hillary. And I think Trump is a crazy man.”

So everyone talking about a “Hispanic” vote or a “brown” vote or any such nonsense were merely showing their own wishes for the country to look that way. The reality is that many Cuban-Americans and Puerto Ricans—especially the ones in Florida, who tend to belong to the professional classes—do not consider themselves anything but white.

Nor would members of either group worry about Trump’s deportation of illegal immigrants. Puerto Ricans are American citizens, and Cubans in the U.S. cannot be illegal because of the Cuban Adjustment Act, which allows all Cubans who touch dry land safe entry.

Above all, Clinton owes her demise in Florida to Obama, who with trademark hubris pushed his Cuba opening further by allowing in October a United Nations vote against the U.S. embargo on Cuba and liberalized imports of Cuban cigars and rum. His ideological belief in a “brown” Hispanic vote made him fail to understand the Cuban-American vote.

Longtime Miami Herald columnist Andres Oppenheimer wrote last week that Obama was convinced to push ahead by a vote by a Florida International University poll in August that showed Cuban-Americans supported his opening to the Castros.

There is only one wrinkle that Obama ignored: 97 percent of citizens in the first group are registered to vote. Among the second group, a mere 43 percent are.

“I wonder what Obama was thinking when he signed the Cuban rum and cigars order—a largely symbolic measure—and when he voted to abstain on the embargo at the U.N., just a few weeks before the U.S. elections. What was the rush to press the normalization pedal just now?” asked Oppenheimer.

Indeed. Generalizing about Hispanic votes, or even Cuban-Americans ones, is fool’s gold. Better to appeal to all Americans with good policies, rather than look at the country as a mosaic of groups.