Job Losses Adding Up in America’s Most Liberal State 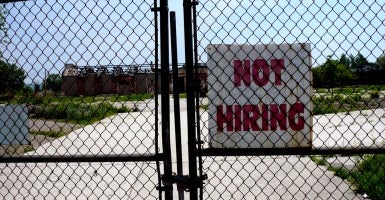 Jeb Spaulding’s unexpected departure as secretary of the Vermont Agency of Administration spells the loss of one of Gov. Peter Shumlin’s trusted advisers at a time when bad news mounts in a state Gallup ranks as the most liberal in America.

The administration depicted Spaulding’s move to become chancellor of the Vermont State Colleges as an opportunity for career advancement.

But the announcement of Spaulding’s departure came after five straight months of tax revenue misses, a subsequent $31 million revenue forecast downgrade by state economists and months of rosy talk of economic recovery and low unemployment, after which businesses appear to be fleeing.

The departure of IBM looks to be slated for October, which could bring new job losses for Vermonters.

The state’s unemployment rate has increased from 3.3 percent in April to 4.1 percent in August at a time when the national rate has dropped.

On top of all that, this past week brought renewed talk of a 12.5 percent payroll tax to fund Shumlin’s single-payer health care system, collapsing support for Shumlin among Second Amendment groups, and evidence Vermont’s population has flatlined as more people are moving out of the state than moving in.

When income tax revenues fell 14.8 in the first quarter, former Deputy Secretary of Administration Tom Pelham called the numbers “a big miss,” but Spaulding said, “We do not believe April’s income tax results indicate a change in our steady positive economic trajectory.”

When the state fell 10.8 percent short of May’s targets, Spaulding found a silver lining, saying, “We are essentially on budgetary target for the year.” He said it was “encouraging” that the personal income tax category was marginally up year-over-year.

In June, when personal income tax revenue missed the target by 7.7 percent, Spaulding grew exuberant, saying, “Revenue forecasters practically hit the nail on the head in terms of projections for the fiscal year. That’s pretty amazing.”

He wasn’t alarmed about the 4.8 shortfall in July, but in August, when income taxes missed by 9.8 percent, he finally sounded a warning. Now, he’s leaving the Shumlin administration entirely.