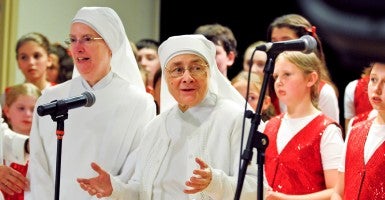 Little Sisters of the Poor, Sister Dorothy and Sister Marguerite, prepare to sing at a Rock-A-Thon. (Photo: Pittsburgh Post-Gazette/Newscom)

The right to live, work and worship according to one’s faith is a freedom foundational to the United States. Many of the first settlers, having faced religious persecution in England, sought a place where they could freely worship and live according to their conscience without interference from the government. The Founders were clear, and the Bill of Rights makes it fundamental to our constitutional order that the government should not infringe on the free exercise of religion.

This incorrect view of religious liberty argues that faith should remain a private affair—relegated to personal activities or weekend worship services.

In recent years, however, Americans have increasingly faced attempts to water down this robust understanding of religious freedom to a mere “freedom to worship.”

Through expansive government mandates and cultural pressures, this incorrect view of religious liberty argues that faith should remain a private affair—relegated to personal activities or weekend worship services. Step outside the four walls of a home or house of worship and robust protection of religious freedom ends.

Perhaps the most egregious example of this whittling away of religious liberty is Obamacare’s anti-conscience mandate. The legal showdown over the now famous rule entered a new round last week. The federal government continued its fight to force the Little Sisters of the Poor, a Catholic charity dedicated to caring for the elderly poor, to cover abortion-inducing drugs and contraception in violation of their faith. While the Supreme Court stopped enforcement of the mandate against some family businesses, non-profit religious organizations like the Little Sisters remain in danger of devastating fines for not complying with the coercive rule.

Unfortunately, the Obama administration’s HHS mandate is hardly the only assault on religious freedom and the right of conscience in the United States.

Obamacare is finding new ways to force individuals and families to pay for health plans that cover elective abortions. The law’s lack of transparency about abortion coverage, coupled with a mandatory abortion surcharge, is so serious an affront to conscience that it has led at least one family to file a federal lawsuit.  The health care law also only includes limited protections for medical professionals who decline to participate in, perform, or refer for abortion because of their moral or religious beliefs.  Those loose protections, coupled with the administration’s weakened guidance on federal conscience regulations, could endanger the ability of doctors, nurses and hospitals to continue working in accordance with their values.

Outside the doctor’s office and beyond the intricacies of health insurance, Americans are also facing new threats to their freedom to work in accordance with their beliefs about marriage. With the redefinition of marriage in a number of states (more often through the rulings of judges than the votes of citizens) has come increasing intolerance in both culture and law toward those who believe marriage is the union of one man and one woman.

Most recently, a couple who runs a farm in upstate New York was fined $13,000 for declining to rent their family farm for a same-sex wedding ceremony. Others involved in the wedding industry, like photographers, florists and cake makers, have been hauled into court for declining to use their artistic talents to participate in same-sex weddings. Facing coercion by state governments to place children with same-sex couples, some Christian adoption agencies have even been forced to end foster care and adoption services rather than abandon their belief that children do best with a married mother and father.

The American conception of religious liberty provides every person the freedom to seek the truth, form beliefs and live according to the dictates of their conscience —whether at home, in worship, or at work. Americans should be free to care for the poor, heal the sick and serve their communities in accordance with the faith without unnecessary government interference.

Protecting the fundamental right to religious freedom will require continued vigilance from every American against an ever-expanding government that threatens to suffocate the free exercise of religion and the charitable works it inspires.

To protect the conscience rights and religious liberty in both healthcare and the marriage debate, policies like the Healthcare Conscience Rights Act, H.R. 940, for instance, would amend Obamacare to include a specific conscience protection for any individual, organization, family business, or issuer who does not wish to pay for or cover a particular service due to a moral or religious objection. The Marriage and Religious Freedom Act, H.R. 3133, would likewise prohibit the federal government from discriminating against groups or individuals who believe that marriage is the union of one man and one woman.