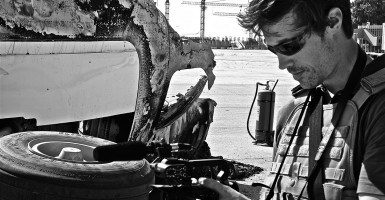 About three out of four voters say the terrorist killer of American journalist James Foley should be sentenced to death if convicted for the murder, a new survey shows.

At the same time, Americans strongly oppose paying the ransom demands of terrorists and have mixed feelings about trying to rescue hostages, according to the survey by Rasmussen Reports.

A total of 71 percent said Foley’s killer, who has not been identified, should be given the death penalty if he were tried and convicted in a U.S court.

Only 11 percent said the U.S. government should pay ransoms to release hostages held by terrorists, while 72 percent opposed ransom payments.

Rasmussen conducted the national telephone survey of 1,000 “likely voters” Aug. 22 and 23. The margin of sampling error is plus or minus 3 percentage points.

Foley’s captors — members of the Islamic State terrorist group also known as ISIS — at first demanded the United States come up with a multimillion-dollar ransom.

The Obama administration refused to pay, following a  longstanding policy regarding terrorists.

Foley’s slaying last week, a beheading at the hands of a masked man believed to be British, was filmed and uploaded on YouTube. The murder occurred after European nations and organizations negotiated the freedom of more than a dozen of their citizens held in the same cell.

ABC News and other outlets reported today that the Islamic State is holding a 26-year-old American woman.

The woman was kidnapped a year ago while doing humanitarian relief work in Syria. She is the third American known to be held hostage by the Islamist terrorists who have seized control of portions of Syria and Iraq.

America does not forget. Our reach is long. We are patient. Justice will be done.

Voters interviewed in the Rasmussen survey appeared ambivalent when asked about the government’s responsibility for the safety of U.S. journalists overseas.

The Obama administration has acknowledged that a military mission to rescue Foley and several other captives in Syria failed last month.