James Foley’s Life in Pictures: ‘A Man of Incredible Bravery and Courage’ 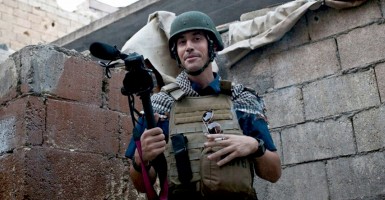 Meet James Foley—a 40 year-old American photojournalist from New Hampshire. He’s a former teacher and mentor who was committed to helping individuals improve their lives. He’s a son, a colleague, a big brother of five and a friend. His family calls him Jim. “Everybody, everywhere, takes a liking to Jim as soon as they meet him,” writes fellow journalist Clare Gillis about Foley in an essay for The Atlantic. He’s also the man in the orange jumpsuit who was beheaded in the graphic video with the title “A Message to America,” posted on social media by members of the Islamic State on Tuesday. Foley was kidnapped by unidentified gunmen in northwest Syria on Thanksgiving Day, Nov. 22, 2012, and remained missing until the video surfaced. The National Security Council confirmed its authenticity Wednesday. Foley documented the suffering and terror in the Middle East, reporting from countries like Libya, Afghanistan and Syria. He gave faces to the people and stories to the battles. He got adrenaline from reporting and lived to expose the Middle East to audiences across the world. His mother Diane Foley released this statement on Facebook after the video was exposed:

We have never been prouder of our son Jim. He gave his life trying to expose the world to the suffering of the Syrian people. We implore the kidnappers to spare the lives of the remaining hostages. Like Jim, they are innocents. They have no control over American government policy in Iraq, Syria or anywhere in the world. We thank Jim for all the joy he gave us. He was an extraordinary son, brother, journalist and person. Please respect our privacy in the days ahead as we mourn and cherish Jim. In early 2011 and Foley was kidnapped with three other journalists while working for the GlobalPost, covering the civil war in Libya. They were brought to Tripoli, and kept there for 44 days.

We’re broken-hearted about it. Jim was a man of incredible bravery and courage, and he showed that right until the horrific end.

While in captivity in Tripoli, Foley said he relied on prayer and company of another captured journalist to give him hope.

I began to pray the rosary. It was what my mother and grandmother would have prayed. I said 10 Hail Marys between each Our Father. It took a long time, almost an hour to count 100 Hail Marys off on my knuckles. And it helped to keep my mind focused. Clare and I prayed together out loud. It felt energizing to speak our weaknesses and hopes together, as if in a conversation with God, rather than silently and alone. If nothing else, prayer was the glue that enabled my freedom, an inner freedom first and later the miracle of being released during a war in which the regime had no real incentive to free us. It didn’t make sense, but faith did. After his return to America and decision to go back, he admitted he lived for the natural endorphins storytelling and uncertainty gave him.

You don’t want to be defined as that guy who got captured in 2011. Rest in peace James Foley, and thank you for your courage.