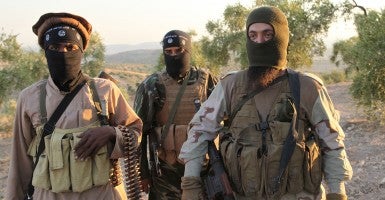 Make no mistake, Islamic State’s methodical march of savagery across the Middle East threatens more than the religious and ethnic minorities caught in its path. The United States and its allies, especially those in the region, have every reason to be concerned about the human cost of allowing Islamic State to roam freely.

Any rational person must be disgusted by the cold-blooded murders (often by truly heinous methods), forced conversions, rape, pillaging, and plunder perpetrated by this Islamist army. The refugee crisis grows by the day; thousands of Yazidis and Christians remain trapped on Mount Sinjar in north-western Iraq. Shiite and Yazidi holy sites and Christian churches have been destroyed. It appears that even the dead will not be spared, as ISIS reportedly destroyed the tomb of the prophet Jonah revered among Christians, Muslims, and Jews.

Islamic State, formerly known as ISIS,  has proven ominously adept at using social media to recruit disaffected youths to their cause, and there is growing concern that Islamic State fighters will return to their countries of origin, posing a serious terrorist threat around the globe. . Up to 1,000 Europeans extremists are thought to be fighting with Islamic State, and members of Congress report that their ranks include over 100 Americans as well.Canadian citizens are fighting with the extremists in Iraq. Over 1,200 Jordanians are fighting alongside Islamic State in Iraq or al-Qaeda’s Jabhat Al-Nusra in Syria. And more than 5,500 citizens of the Gulf States, including Saudi Arabia, Qatar, Kuwait, Bahrain, and Oman, are believed to be fighting with Islamic State.

Indeed, Islamic State threatens to destabilize the entire region. Senator Marco Rubio (R-Fla.) was correct when he recently wrote that Islamic State “will not rest once it has taken Erbil or Baghdad.” While it is true that limited U.S. airstrikes and humanitarian aid are hardly enough to stop the relentless march of Islamic State, America is not the only nation with an interest in seeing Islamic State destroyed. U.S. allies, especially those in the region, should be doing more.

The United Kingdom has conducted three drops of humanitarian aid to refugees on the Sinjar Mountains (one air relief mission was aborted because too many people were on the ground to safely drop the aid). The UK has also announced it is sending Tornado jets to Iraq to conduct surveillance operations that will help the humanitarian mission. However, thus far, military action has been ruled out.

The French have likewise provided aid to refugees and will start sending arms directly to the Kurds. However, French Foreign Minister Laurent Fabius reiterated on Sunday that, “As for France, our support is currently humanitarian… France is not currently planning a military-style intervention.”

They are at least doing more than most. Canada has pledged $5 million in new aid to Iraq, but provided no military assistance. The Italians are considering military support, but nothing so far. The Arab League blasted the “crimes against humanity” committed by ISIS in Iraq, but thus far no U.S. ally in the region has offered military support. Kuwait, Jordan, and Saudi Arabia have over 400 F-15s, F-16s, and F-18scombined, but none have been offered to hit ISIS targets.

The U.S. recently signed an $11 billion defense agreement with Qatar. Qatari fighter jets took part in NATO operations to oust Gadhafi in Libya in 2011; why not against Islamic State?
Our allies near and far have just as great a vested interest in preserving Iraq as we do. Yes, the U.S. could be doing more to stop Islamic State in Iraq. But our allies need to get in the game, too.