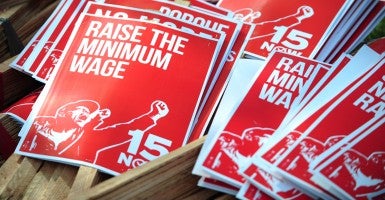 Last week, the council voted, 5-3, against a moderate proposal to raise the minimum wage over time and to exempt small businesses in the early stages so they could adjust. The council did so to clear the way for a ballot measure to put before the voters in November that would raise the wage for all businesses to $12.25 beginning in March.

The $12.25 increase is supported by Lift Up Oakland, an organization heavily backed by labor unions.

“By putting a competing wage initiative on the ballot, it could have potentially torpedoed any increase for the minimum [wage],” said Jason Overman, spokesman for City Council President Rebecca Kaplan.

Overman said Kaplan voted against the more moderate wage proposal because she believes the Lift Up Oakland idea is better. But she also received campaign contributions from some of the same groups that have backed Lift Up’s proposal.

In fact, four of the five councilmen who rejected the proposal have received support form Lift Up Oakland.

“Campaign contributions from years ago never play a role in how she votes for policy. There’s no connection,” Overman said of Kaplan’s vote. “Her contributions are never in her field of vision when it comes to votes.”