Your Chicken Sandwich Costs More With a $15 Minimum Wage 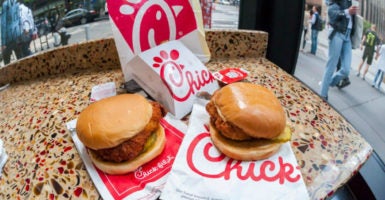 A chicken sandwich that sells for $3.05 could cost customers $4.21 with a $15 minimum wage, a Heritage Foundation report finds. (Photo: Richard B. Levine/Newscom)

Progressives are touting a $15 minimum wage as a low-cost policy to reduce poverty and income inequality. However, the costs of a high minimum wage are higher than its proponents would like to believe.

In a recent Heritage Foundation backgrounder, James Sherk outlined the costs to consumers of a $15 minimum wage and took issue with methodological flaws in two studies that proponents of a higher minimum wage often cite.

Relying on peer-reviewed scholarship on the fast-food sector, Sherk estimates that increasing the minimum wage to $15 would raise fast-food prices 38 percent and reduce employment 36 percent. A chicken sandwich that currently sells for $3.05 would instead cost customers $4.21.

The logic is straightforward: With higher labor costs and already narrow profit margins, fast-food restaurants will have to raise prices. But with higher prices, consumers spend significantly less on fast food.

Sherk goes on to argue that two studies predicting little effect from a $15 minimum wage on fast-food business models include fatal flaws.

One study by Purdue’s School of Hospitality and Tourism Management found that a $15 minimum wage would increase a fast-food restaurant’s costs by only about 4 percent.

However, the authors made a major mistake: They added up median costs, rather than average costs, which made 8 percent of all restaurant costs disappear. Since restaurants in the real world can’t make costs vanish, the study has little relevance for them.

A more respectable effort, by the Political Economy Research Institute, likewise found low costs to fast food from a higher minimum wage. However, the institute’s model assumed that fixed costs were constant in the industry, and that the fast-food sector’s future growth would be relatively low cost. With low cost growth ahead of them, restaurants could afford to pay workers more without raising prices.

However, the assumption of constant fixed costs is inappropriate in a multiyear, industrywide projection, since it implies that the industry will be able to grow without building any new stores or buying any new kitchen equipment.

Correcting these three assumptions brings the institute’s model largely in line with Sherk’s.

But a high minimum wage would do more harm than good. It would raise the cost of living for low-income households, including many that don’t include a minimum-wage worker.

A higher minimum wage also would make entry-level employment harder to find, putting the bottom rung of the wage ladder out of reach to those with the fewest marketable skills.

Those who sincerely care about fighting poverty and improving economic mobility will find less costly ways to meet those goals.