Q&A: What Are These Tunnels Hamas Is Using to Attack Israel? 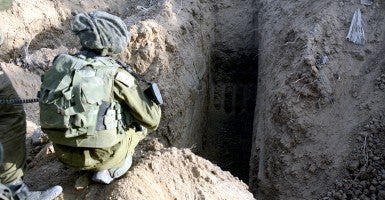 A gigantic maze of subterranean military facilities used by Hamas to launch attacks on and infiltrate Israel through tunnels. (Photo: Polaris/Newscom)

As part of the ongoing military campaign in Gaza, the Israeli military says it is now focused on destroying underground tunnels that Hamas is using to infiltrate Israeli soil.

Q: How sophisticated are these tunnels?

Many of the tunnels are extremely sophisticated, with concrete linings, electricity, telephone lines and electric lights. They are dug as deep as 90 feet below the surface and can contain offshoots that extend in many directions with multiple exits and entry points. Some of the command bunkers that protect Hamas leaders from Israeli retaliation for their rocket terrorism are equipped with water, toilets and sewage lines.

Q: How many are there?

The total number is unknown, probably even to Hamas, because other terrorist organizations and smuggling rings independently dig tunnels. The Israelis have found at least 36 tunnels running into Israel – and even this may be an underestimation. Hundreds more are believed to have been built underneath Gaza’s border with Egypt.

Q: How does Hamas use them?

The “offensive tunnels” are used to move Hamas commandos under the border to launch terrorist attacks against Israeli civilians and military attacks against Israeli soldiers. In 2006, Hamas militants used a tunnel to launch a surprise attack that captured an Israel soldier, Gilad Shalit, who was held as a hostage for five years before being exchanged for over one thousand Palestinian prisoners. Some of the Palestinians killed after exiting tunnels were found to be carrying handcuffs and tranquilizers, indicating that they hope to seize another Israeli hostage.

Hamas also uses tunnels to smuggle arms, including sophisticated Iranian rockets, into Gaza from Egypt. Tunnels also are used to smuggle people, contraband and consumer goods into Gaza. Hamas owns many of these smuggling tunnels, from which it makes tremendous profits, and also runs a protection racket in which it “taxes” goods smuggled through tunnels owned by other Palestinian groups.

Q: How long has Hamas been using them?

Hamas has been building tunnels for many years but the pace of building really accelerated after it seized power in Gaza a bloody 2007 coup.

Q: How are they built?

They are built with construction materials imported into Gaza, which is one reason that Israel has restricted the movement of materials across the border. Many Palestinians have had trouble building or repairing private homes because Hamas has diverted concrete, steel and other construction materials to make the tunnels. One tunnel discovered by the Israelis was a mile and a half long, contained an estimated 800 tons of concrete and cost approximately $10 million to build. Hamas puts a higher priority on building tunnels to kill Israelis than it does on building a Palestinian state or even protecting its own people by building bomb shelters.

Q: What is Israel doing about it?

Israel launched a ground offensive along the periphery of the Gaza strip in order to find and destroy the tunnel network, which is difficult to do from the air. The Israelis have discovered at least 36 tunnels and have advanced into the Shijaiyah neighborhood, where many tunnels reportedly converge.

Q: Does Israel use similar tunnels for attacks?

As far as I know, Israel does not use tunnels for offensive purposes.

Q: Do other countries use tunnels for strategic attacks?

Tunnel warfare has a long history, particularly in wars in which one side seeks to neutralize the air superiority of its adversary. During the Vietnam War, North Vietnam constructed a huge tunnel network to transport supplies southward and stage attacks on South Vietnam’s cities. North Korea has built an elaborate tunnel system, including one underneath the Demilitarized Zone that was big enough to disgorge 30,000 soldiers in an hour and another big enough for tanks to move through.

North Korea, which has developed world-class tunneling techniques, reportedly has helped Iran build underground facilities for use in its nuclear program. North Korea also helped Hezbollah, Iran’s terrorist proxy, build underground bunkers in Lebanon that Hezbollah used to bombard Israel with rockets. Just yesterday, North Korea was found liable by an American court for Hezbollah rocket attacks because of the advanced arms and construction assistance it provided to Hezbollah. It is likely that Hamas has received Iranian assistance in replicating the Hezbollah underground bunker strategy in Gaza.