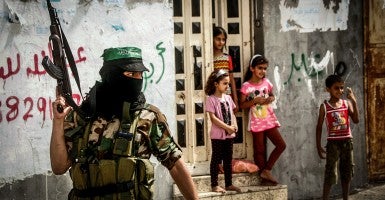 A Palestinian militants from Izz al-Din al-Qassam Brigades, dependent of Hamas movement, during stage a parade in Rafah in the southern Gaza Strip on May 29, 2014. (Photo: Abed Rahim Khatib/NurPhoto/Sipa USA)

President Obama’s Middle East policy continues to unravel with dangerous consequences for American national interests and those of its allies. On Monday, the Palestinian Islamist extremist movement Hamas joined a government of national unity with the rival Fatah movement, the dominant faction within the Palestine Liberation Organization.

This move represents a setback for the U.S, a blow to peace prospects and a significant threat to Israel because Hamas remains committed to Israel’s destruction and rejects negotiations with the Jewish state.

Israel’s security cabinet unanimously voted to impose economic sanctions against the new government and hold it responsible for any terrorist attacks launched from the Hamas-controlled Gaza Strip.  Israeli Prime Minister Benjamin Netanyahu warned that Palestinian Authority President Mahmoud Abbas in effect was saying “yes to terror, and no to peace.”

But the Obama administration has adopted a wait-and-see approach, arguing that none of the technocrats named as ministers in the new transitional government are publicly affiliated with Hamas.  But Hamas had a hand in selecting the officials and is sure to play a major role behind the scenes in shaping the policy of the interim government.

Moreover, Hamas remains a terrorist organization designated by the U.S., Israel and the EU.  It has turned Gaza into a fortified base for terrorism where it hides behind Palestinian civilians to launch rockets at Israeli civilians, provoking wars with Israel in 2008 and 2012.

U.S. aid to Hamas is prohibited under law.  The Palestinian Anti-Terrorism Act of 2006 bars U.S. funds from going to Hamas, Hamas-controlled entities or a Palestinian government that includes Hamas as a member.

Section 7040 of the 2014 Consolidated Appropriations Act also restricts U.S. aid to the Palestinian Authority from going to “Hamas or any Hamas-controlled or power-sharing government unless the President certifies to Congress that it has accepted Israel’s right to exist and is adhering to previous agreements with the United States, Israel, and the international community.”

Both laws allow the president to issue a waiver for national security reasons, which gives the administration another route to continue its failed engagement with the Palestinian Authority, which is drifting away from negotiations with Israel, instead preferring reconciliation with Hamas.