Lila Rose: Undercover Videos Prove ‘What Has Been Happening Now for Decades’ 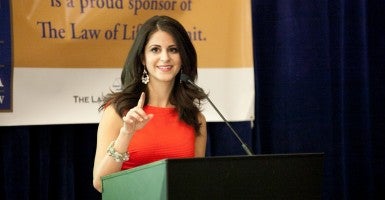 Lila Rose, the founder and president of pro-life group Live Action, said Planned Parenthood should be "immediately defunded" in an interview with The Daily Signal. (Photo: American Life League/Flickr/CC BY-NC 2.0)

Lila Rose, the founder and president of Live Action, a pro-life group, knows firsthand what it is like to film Planned Parenthood employees undercover.

Live Action has released many undercover videos of Planned Parenthood staffers, including a video of clinic staff giving X-rated advice to underage girls.

In an interview with The Daily Signal, Rose said the Center for Medical Progress’ videos showing senior executives at Planned Parenthood discussing the sale of fetal organs “proves what has been happening now for decades.”

“They are engaged in the sale and profiteering of baby body parts,” Rose said.

Planned Parenthood has denied claims that they profit from their “tissue donation” program. Spokespersons for the organization have repeatedly called the videos “heavily edited.”

“They’re going to continue to say it because it is their only defense,” Rose said.

She said the full videos, also released by the Center for Medical Progress, are just as disturbing.

Rose believes that Planned Parenthood should be investigated and “immediately defunded.”

She also criticized Senate Majority Leader Mitch McConnell, R-Ky., for blocking an amendment to the highway bill which would have defunded Planned Parenthood.

She called on Congress to pass legislation defunding the nation’s largest abortion provider and to redirect those funds to other women’s health services.

“The bill needs to go to the president and it can be on his conscience if he chooses to veto it.”

McConnell was condemned by conservatives for blocking several amendments to the highway bill, including the amendment introduced by Sen. Mike Lee, R-Utah, which would have defunded Planned Parenthood.

McConnell has since signed on as a co-sponsor to legislation introduced by Sen. Joni Ernst, R-Iowa, that would defund Planned Parenthood and divert those funds to other women’s health providers.

Rose praised undercover videos as “citizen journalism” and predicted that the scandal surrounding Planned Parenthood is far from over.

“It’s life or death,” Rose said. “That sense of conviction can carry you far.”