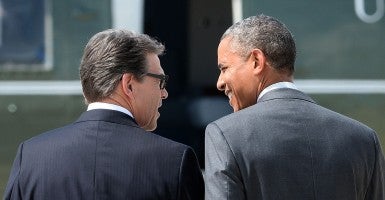 President Obama and Texas Gov. Rick Perry prepare to board Marine One in Dallas on July 9. (Photo: Jewel Samad/AFP/Newscom)

“It is a very large amount of money and as you analyze it, very little of it is for border security,” Perry said of the president’s $3.7 billion spending plan on “Fox News Sunday.”

House Republicans, McCaul said, are “not going to write a blank check.”

Last week, Obama met with the Texas governor to discuss his  package to address the surge of illegal immigrants, many of them minors, from Central America. “I urged the governor to talk to the Texas delegation [to Congress], which is obviously at the heart of the Republican caucus … in the House and has great influence in the caucus in the Senate,”  Obama said afterward.

Perry told Fox News’ Brit Hume today that the president “doesn’t have to have this big amount of money,” and instead advocated that 1,000 National Guard troops be positioned along the border as a show of force.

“Because it’s the visual of it I think that is most important,” Perry said.

And on CBS’s “Face the Nation,” Perry stressed that in May 2012 he had heightened a standing request for National Guard troops for the Texas-Mexico border by warning the White House of increasing numbers of unaccompanied children crossing the border and the potential consequences. He added:

On ABC’s “This Week,” McCaul supported Perry’s proposal to muster the National Guard and called for a “targeted approach” to the crisis.

“Our view, I think, as House Republicans, is look, we’re not going to write a blank check,” he said.

“It’s $3.7 billion, and less than 5 percent of it goes to actual border security,” Cruz said  in an exclusive interview with The Daily Signal. “The president’s selling it as a border security bill, but it’s a social services bill.”

Many conservatives, however, dismiss such language as cover for granting amnesty to millions of illegal immigrants rather than securing the border, rigorously enforcing the law in employment and other areas, and improving visas and other formal procedures for legal immigration.

Rep. Joaquin Castro, D-Texas, said on NBC’s “Meet the Press”  that critics are wrong to call the border crisis Obama’s “Katrina moment” — something host David Gregory called unanticipated and “handled incompetently” —  and to criticize Obama for not visiting the border while in Texas for fundraisers. “The fact is that this was not the president’s last opportunity to get to the border,” Castro said, adding:

I think it ‘s important for him to go down there at some point … to let people know that he personally is attending to the situation … and also, David, to say thank you to the people of of Texas who have offered food, clothing, shelter, everything they can to these kids to be helpful.

House Judiciary Chairman Bob Goodlatte, R-Va., whose committee has moved several immigration reform bills,  said on “This Week”  that Congress ought to approve only “targeted” spending on the border crisis, including for resources to hold unaccompanied children from Central America and send them home.

Goodlatte said Obama can do “an awful lot” to deter border crossers without new spending, and should meet with Mexican leaders on what that country can do — especially “securing their southern border with Guatemala.”

We have to act soon. It’s a very tragic human crisis at the border, none like I’ve ever seen before.