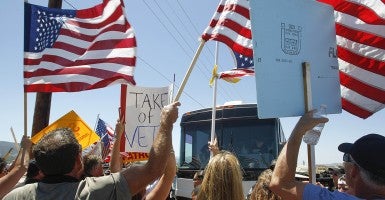 The Department of Homeland Security on Tuesday flew some 140 undocumented women and children from Texas to Southern California. They were supposed to be processed in Murrieta but were turned away by the crowd. (Photo: Hayne Palmour Iv/U-T San Diego/ZUMA Wire)

Busloads of illegal immigrants attempting to reach a Border Patrol processing station in Murrieta, Calif., were met with backlash from locals yesterday.

Three buses with about 140 detainees were forced to turn around and return to a San Diego-area Border Patrol facility after 100 to 150 protesters blocked the buses from coming through, according to the Los Angeles Times.

The protest spawned as a reaction to the federal government’s announcement that multiple waves of illegal immigrants would be moved to the city’s Border Patrol facility.

Murrieta Mayor Alan Long encouraged the protests, saying in a City Council meeting after the protests that the city “expects our government to enforce our laws, including the deportation of illegal immigrants crossing our borders, not disperse them into our local communities.”

“The people who live here are passionate about their community, and that’s what you’re seeing outside today,” Long said, as reported by the Los Angeles Times.

A Murrieta spokeswoman also criticized the federal government’s handling of the recent influx of illegal immigrants.

“We were never given sufficient warning by the federal government,” spokeswoman Kim Davidson said following the protest. “When people are scared and don’t have all the information they have a right to react.”

>>> Obama Baits ‘Do Nothing’ House, Promises Action on Border, Immigration

The president of Border Angels, a San Diego-based nonprofit that aims to provide assistance to immigrants, said that simply sending immigrants back is “not a humanitarian solution,”according to USA Today.

The spike of illegal immigrants overwhelming Border Patrol facilities along the Southwest border has caused officials to move them to lower-trafficked areas, straining local governments to provide the necessary accommodations.