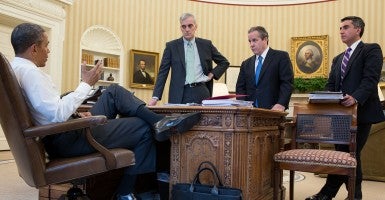 President Obama asked Congress today for more than $2 billion in emergency funds to manage the surge of illegal Central American immigrants at the South Texas border, and to speed the deportation of those already here.

The president, in a letter sent to Congress, asks lawmakers to revise existing immigration law to give the Department of Homeland Security secretary, Jeh Johnson, new authority to quicken the screening and deportation of unaccompanied migrant children who are not from Mexico.

The White House will send a detailed request for the funds when Congress returns from its holiday recess July 7.

Under current U.S. law, Border Patrol agents are required to take child migrants who aren’t from Mexico into custody, screen them and transfer them to the Department of Health and Human Services within 72 hours.

HHS keeps the children at detention centers until it can unite the children with family or a sponsor in the United States, before they appear in immigration court to determine their status.

Under current law, if children come from Mexico, they can be returned immediately if they don’t pass an initial screening interview by a Border Patrol agent, who determines whether a credible fear exists.

Obama wants the same process to apply to Central American children rather than automatically taking them into custody and undergoing full court proceedings.

As part of his request, Obama is also asking for tougher penalties for smugglers who bring children and other migrants into the United States illegally. IIn addition, he asks for “a sustained border security surge” and an increase in immigration judges to clear court backlogs.

“In theory, these are good ideas,” said David Inserra, a research associate for homeland and cyber security at The Heritage Foundation.

“It’s using our enforcement tools quickly and efficiently to reduce the workload on ICE [Immigration and Customs Enforcement], border agents and immigration judges. While the funding may be necessary, this underscores the consequences of not enforcing the law. If border enforcement had been stronger, the spending would not have been necessitated.”

More than 52,000 unaccompanied children and 39,000 women with children have been apprehended at the border this year.

Border officials have told the Daily Signal that three of four people crossing the Texas-Mexico border are from countries other than Mexico.

Obama has already has added capacity to process and place the border crossers, directing Secretary Johnson to coordinate assistance from various sections of the government, including HHS, Immigration and Customs Enforcement, the Federal Emergency Management Agency, and the Coast Guard.

Republicans have criticized the administration’s border policies, calling them weak, and demanding that the White House send a stronger message that women and children cannot stay here.

Last Thursday, Obama offered a warning to Central American parents in an interview on ABC News. “Do not send your children to the borders,” Obama said. “If they do make it, they’ll get sent back. More importantly, they may not make it.”

On Tuesday, Secretary of State John Kerry will meet with the leaders of El Salvador, Guatemala and Honduras to address the problem. Next week, Secretary Johnson will travel to Guatemala.