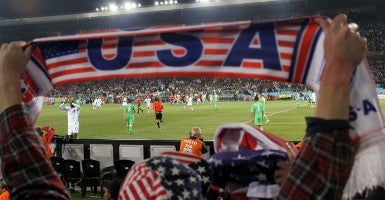 A lot of folks, including my colleague Steve Moore, say that soccer is boring and un-American. I’m here to tell you why they’re wrong.

Steve, like many critics, bemoaned the lack of action and scoring in soccer in his piece headlined “Why Americans (Rightly) Hate Soccer.” But there’s so much to enjoy throughout the 90 or more minutes of a game, including the footwork, tight-knit passing, runs off the ball, 40-yard long balls, individual talent and team play. And because the goals are few and far between, it makes it even more special.

Sure, the theatrics and whining in soccer are a bit much. But NFL players frequently whine about a flag call, and NBA players flop. Theatrics is a part of sports and refs influence games in all sports. Deal with it.

A passion for soccer is growing tremendously in America: Last week, 18.2 million viewers watched United States draw versus Portugal. This was the highest World Cup rating ever and higher than any other sport program on ESPN outside of football.

That interest is electrifying the country. The American Outlaws’ “I believe” chant is contagious and chilling. Yelling it feels like bald eagles are flying out of your vocal chords.

Nor is the interest just a fleeting side effect of the World Cup. Major League Soccer stadiums are bouncing and hipsters are tuning into the English Premiere League. And I love it.

Detractors dismiss soccer as socialist and un-American. After the Germany loss, snarky remarks included, “How many more games do we have to lose in order to win the championship?” But American professional sports aren’t all win-or-go-home games. Ever heard of a round-robin? We have seven game series in playoffs where you can lose multiple times and still advance.

Soccer is both competitive and market-oriented off and on the field. In international soccer leagues teams take risks to invest in teenagers. American sports, meanwhile, have age restrictions, minimum wages, revenue sharing and salary caps. European soccer leagues reward success and remain competitive by promoting and relegating teams based on performance.  The NBA rewards tanking seasons to receive higher draft picks the next year. We appreciate globalization and the free movement of labor and capital to promote competition and ultimately a better product.

On the field, as AEI’s resident scholar Stan Veuger writes, “It is soccer, not football, that celebrates freedom, creativity, and the ability of the individual to shape his own future in practically every game.”

What’s truly un-American is not rooting for the American underdog. We were the underdogs in the Revolutionary War — should we have just hung it up and given in to a life of higher taxes and significantly less freedom?

But Steve would rather watch our American cast of basketball All Stars crush teams by 40 points in the Olympics. Me? I’ll embrace the challenge of Americans being the underdog. Since when is America known to back down from a challenge? We shouldn’t be afraid of hard work, sweat, perseverance and overcoming odds … you know, the qualities that built this great nation in the first place.