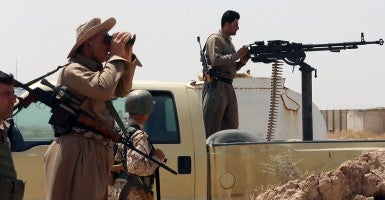 Iraqi Kurdish forces take position June 29 as they fight jihadists from the Islamic State of Iraq and Syria (ISIS) in the Iraqi village of Bashir. (Photo: AFP/Newscom)

With the rapid advance in Iraq of the deadly terrorist group calling itself the Islamic State of Iraq and Syria (ISIS), political leaders and policy analysts are concerned not only with regional security in the Middle East but with new threats to America’s national security.

In Part 1 of this interview, The Heritage Foundation’s expert in Middle Eastern affairs, James Phillips,  laid out why Americans should pay attention to the growing turmoil in Iraq. Now, in Part 2, Phillips shares the strategy he thinks the Obama administration should adopt to fend off another 9/11. He also explains why “it may be too late” to achieve some of the nation’s goals in Iraq.

The Daily Signal: President Obama publicly announced, “We will not be sending U.S. troops back into combat in Iraq.” What do you think of that decision?

Phillips: I think, as usual, the White House’s foreign policy statements are targeted primarily for a domestic political audience  — its liberal supporters. This approach  undermines the perceived value of security ties to the United States for a broad international audience.

No American experts were calling for the deployment of combat troops on the ground, so there was no pressing need to rule out such a policy.  But publicly announcing a ban on ground troops further undermines Iraq’s Shia-dominated government and emboldens ISIS and other Sunni insurgents.

Q: What strategy do you think the Obama administration should deploy to contain this crisis?

A: The Obama administration correctly has deployed special forces to assess the fast-moving situation on the ground and gather intelligence on ISIS that would facilitate future air strikes.  The administration belatedly has recognized the need for intelligence, counterterrorism, and training capabilities that Iraqi security forces were deprived of when U.S. troops were withdrawn in December 2011.

Unfortunately, it is now too late to stuff the ISIS genie back in the bottle.  Iraq is dissolving into an ISIS-dominated Sunnistan in the west, an Iran-dominated Shiastan in the south and a Kurdish autonomous region in the north that is increasingly independent of Baghdad.  The best that Washington can do now is to help stem the ISIS advance on Baghdad through drone and air strikes, try to peel away support for ISIS by Sunni tribal militias, and help build a more inclusive and broad-based  government in Baghdad. It may be too late to accomplish these goals.

Q: If Iraq were a true republic, what direction do you think the majority would want to go and why?

A: Iraqis are sick and tired of civil disorder, sectarian violence, and misrule by a heavy-handed government.  They yearn for political stability and a reformed, transparent, and effective government.  But Iran, which is the big winner in the current crisis because Baghdad has become more dependent on its security assistance, has other ideas.

Iran seeks to bolster the power of its Shia allies and turn them into pliable surrogates.  Saudi Arabia and other Sunni states in the Persian Gulf also are waging a proxy war against Iranian influence by supporting Sunni Arab tribes and other Sunni militant groups.  Most Iraqis are caught in the middle of this crossfire.

Q: You coined a phrase, “petro-Islam.” Can you explain what this means and why it matters?

A: I actually borrowed it from the late Fouad Ajami, a brilliant Middle East scholar who most recently worked at the Hoover Institution.  It is a reference to the huge transfer of wealth from oil importers to oil-exporting states, which has fueled the rise of Islamist groups in the Muslim world.

Saudi Arabia has used petro-dollars to finance the propagation of Islam’s Wahhabi religious teachings, while Iran has used its oil revenues to finance the export of its radical Shia brand of Islamist revolution.  Al-Qaeda is financed in large part by private donors and Islamic networks in the oil-rich Gulf kingdoms.

All of these petro-Islamic forces are now clashing in Iraq with disastrous results for Iraqis and for the long-term security interests of the United States and its allies.

>>> Previously: Q&A: How the Crisis in Iraq Puts Americans at Risk of Terrorism

For more of James Phillips’ insight and analysis: