This Man Is Now Third in Line for Presidential Succession 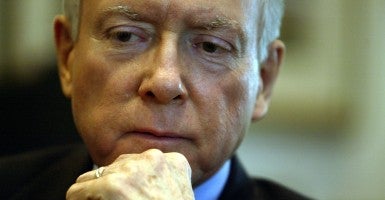 Since Election Day, pundits have bombarded the incoming Republican majority with a common refrain, “Republicans must prove they can govern.”

Hatch told The Daily Signal that he’s frustrated the “foundations of the Senate’s unique character” have been sacrificed “in an attempt to score political points” during the last session. As president pro tempore, he intends “to be active in helping restore the Senate as a deliberative and legislative body.”

A constitutionally mandated office with a classically inspired title, the president pro tempore serves as the presiding officer of the Senate “for the time being” during the vice president’s absence.

Thus, for the 114th Congress, Vice President Joe Biden technically will remain the Senate’s president, and Hatch will serve as president pro tempore.

More than a symbolic title, the president pro tempore does wield power. By law, the officer presides over the Senate and stands third in line for presidential succession. By tradition, he serves as the elder statesman of the entire legislative body.

A past president pro tempore, Sen. Robert C. Byrd, D-W.V., best described the position as the highest Senate honor “bestowed upon a colorful and significant group of senators during the past two centuries—men who stamped their imprint on the office and on their times.”

Since the first Senate quorum in Philadelphia to the most recent session in Washington, D.C., the president pro tempore has exerted significant influence.

Most notably during the rogue vice presidency of John C. Calhoun, the Senate employed the office to hold back executive encroachment.

On the eve of the nullification crisis, Calhoun began appointing Senate committee chairman hostile to the current administration. Together, President John Quincy Adams and Sen. Henry Clay wrested appointment power from Calhoun to place it in the hands of the president pro tempore.

Committee appointments have since become the prerogative of Senate caucuses. However, the president pro tempore has played an important role in safeguarding the constitutional separation of powers.

The most senior member of the new majority, Hatch assumed the historic position on Tuesday afternoon. At 80 years old, Hatch is the oldest Republican in the Senate.