The Message Jihadi John’s Death Sends to Other Jihadists 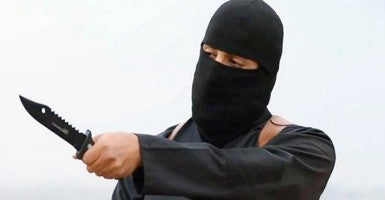 The reported killing of British militant Mohammed Emwazi, commonly known as Jihadi John, is a significant blow to the Islamic State. It is a clear signal that the United States and Great Britain are prepared to stand up to the evils of Islamist terrorism. Emwazi was successfully targeted by a US drone strike on the ISIS stronghold of Raqqa in Syria on Nov. 12.

The successful strike was the result of a painstaking joint operation by American and British security and intelligence agencies, and an example of the Anglo-American special relationship in action.

According to British Prime Minister David Cameron in a statement outside Downing Street this morning:

We have been working, with the United States, literally around the clock to track him down. This was a combined effort. And the contribution of both our countries was essential.

Emwazi is a barbaric murderer. He was shown in those sickening videos of the beheadings of British aid workers. He posed an ongoing and serious threat to innocent civilians not only in Syria, but around the world, and in the United Kingdom too.

He was ISIL’s lead executioner, and let us never forget that he killed many, many, Muslims too. And he was intent on murdering many more people.

So this was an act of self-defence. It was the right thing to do.

Today I want to thank the United States: the United Kingdom has no better friend or ally.

The emphatic elimination of Jihadi John sends a message to foreign jihadists in Iraq and Syria that they will be targeted and taken out. At present there are thousands of Westerners fighting in the region, and at least 700 Britons.

Jihadi John was a traitor to his country, an evil and barbaric terrorist responsible for the deaths of five Western hostages: James Foley, Steven Sotloff, David Haines, Alan Henning, and Peter Kassig. His death should serve as a warning to other Britons who seek to take up arms against their own nation.

The killing further underscores the need for the UK to make a full commitment to joining the US-led military operation in Syria. Cameron should go before Parliament and make the case for Britain to join US-led airstrikes in Syria.

The British security services must also step up the fight against homegrown terrorists inside the UK. There remains a huge threat to British security from Islamist radicals who seek to sow the seeds of death and destruction on Western soil.

As Cameron declared in London today:

The threat ISIL pose continues. Britain and her allies will not rest until we have defeated this evil terrorist death cult, and the poisonous ideology on which it feeds.