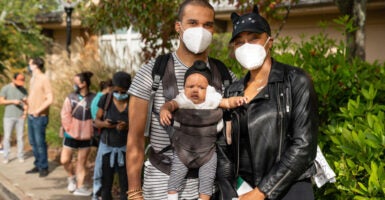 Jamal and Michelle Jenkins wait in line with their 4-month-old daughter Asia to cast their ballots at an early voting location in the Smyrna Community Center on Oct. 24, 2020, in Smyrna, Georgia. (Photo: Elijah Nouvelage/AFP/Getty Images)

I’m a conservative, and I guess I should be writing a column about my great distress resulting from this election. But I’m not going to write that column, because it’s not what I feel.

I’m actually quite upbeat and optimistic about the country that I love.

With all my genuine, and legitimate, concerns about the chaos and violence that have ravaged many of our urban areas, about the strident rhetoric dominating our media, with its grossly distorted message about what is happening in America, when it came time to vote, American democracy prevailed.

Not only did Americans vote in a turnout the nation has not seen in 120 years, but it also happened peacefully, as it must.

Am I turning a blind eye to the real possibility of irregularities? No, I am not. We’ll see what happens.

But take a look at what the Chinese are doing in Hong Kong. Take a look at Venezuela. Dictatorships stamp out and smother people gasping for breaths of freedom.

This is not happening in our great country. The rule of law will play out here. Maybe not to the liking of many, including me.

But the fruits of any democracy are just as good as the people in it. And this is also what makes me optimistic.

As anyone who reads what I write knows, I see profoundly disturbing and threatening trends defining our national reality today.

But, America is filled with tens upon tens of millions of wonderful people who are deeply committed to American principles and American freedom. I meet them all the time as I traverse the nation in my travels. They call me, and they write to me.

Most are busy making ends meet and raising their families. They don’t have time for political theory or history books. They just have a feeling inside about what is true and right.

I am talking about Americans of all ethnicities. They are speaking up, and many of the trends that began in 2016 continued into this election.

The hairsplitting vote counts that turned the election in favor of Joe Biden cannot be seen in any way as a mandate.

Even in my home state, the blue-as-can-be California, four ballot initiatives pushing to the left were defeated.

Proposition 15, which would have raised property taxes on commercial and industrial property: NO

Proposition 16, which would have restored racial preferences in government hiring and contracting and in education: NO

Proposition 21, which would have expanded government authority to impose rent control: NO

Republicans have picked up nine seats in the House of Representatives, putting them in close range to regain the House in 2022.

Republicans appear in a solid position to retain control of the Senate.

All strong and bullish signs of underlying positive sentiment for Republicans.

Perhaps most revealing, Americans vote with their feet.

For sure, the great burden lies on those who care about America remaining a free nation.

No action means that current trends toward more government, more socialism, and more rampant materialism and secularism will continue.

So, conservatives must continue the work to keep the torch of freedom burning.

We must, and we will. We have plenty to be optimistic about.