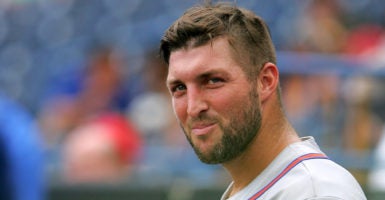 The mother of former NFL quarterback Tim Tebow will be the keynote speaker at the 36th annual March for Life Rose Dinner on Jan. 19 in Washington.

Pam Tebow first came to the public’s attention when she was featured in a Super Bowl commercial in 2010 with her son promoting family and the right to life. Since then, she has become a leader in the pro-life movement.

“We are delighted that Pam Tebow, an influential force in the pro-life community, will be speaking at our 36th annual Rose Dinner this year,” Jeanne Mancini, president of the March for Life, announced last week. “Pam is a powerful example of how love saves lives and how one woman’s pro-life message can change the hearts and minds of the masses.”

Working as missionaries, Tim Tebow’s parents lived in the Philippines with their four children in 1985, and his mother was pregnant with him while they were there, according to a blog written by Randy Alcorn, a Christian author.

Alcorn noted that when Tebow’s mother was pregnant with him, she contracted amoebic dysentery, an infection of the intestines.

She was given drugs for the infection, but those drugs caused the placenta to detach from the uterine wall, which in turn caused the baby to suffer a lack of oxygen, according to Alcorn. When she realized she was pregnant, she stopped taking the drugs.

Alcorn said the Tebows were told by a doctor that an abortion was the best option.

“Pam refused to have an abortion and asked for God’s help,” Alcorn wrote. “She was in … a Manila hospital for the final two months of the pregnancy.”

Tebow decided against an abortion, and she had her fifth child, one who would grow up to become a Heisman Trophy-winning college football quarterback for the University of Florida in 2007. He went on to play in the NFL, where he was known for expressing his faith. He has since switched sports and is now playing baseball in the minor leagues.

The Rose Dinner will be held at the Renaissance Washington, DC Downtown Hotel. Tickets can be bought on the March for Life website.