A Taxpayer’s Guide: Export-Import Bank Under Microscope at House Hearing 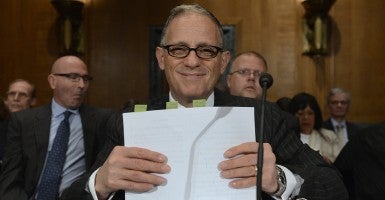 Rep. Jeb Hensarling today convenes the House Financial Services Committee for a much-anticipated hearing on the fate of the U.S. Export-Import Bank, a federal agency that the Texas Republican says has a well-deserved reputation for corporate welfare and cronyism.

The Export-Import Bank, which provides taxpayer-backed loans to foreign companies and governments to buy U.S. products, turned into a hot topic on Capitol Hill largely because Hensarling has challenged fellow lawmakers not to rubber-stamp renewal of the 80-year-old agency’s charter.

Fred Hochberg, the bank’s chairman, and Osvaldo Gratacos, its inspector general, are scheduled to testify. Hensarling and his colleagues also will hear from top officials from Delta Airlines, a critic of the Ex-Im Bank’s practices in favor of rival Boeing, and FirmGreen Inc., like Boeing a beneficiary of Ex-Im loans.

For voters and taxpayers just tuning in, here’s a guide to where things stand:

“It’s going to be very hard for House Republicans and leadership in the House to move forward with a reauthorization [of the bank’s charter] when the party seems to be galvanizing around allowing it to expire,” Dan Holler, communications director for Heritage Action for America, told The Daily Signal.

Heritage Action, the lobbying arm of The Heritage Foundation, is part of a coalition of groups brought together this year by Americans for Prosperity to push for letting Ex-Im’s charter expire Sept. 30.

Allies of the bank, led by the U.S. Chamber of Commerce and National Association of Manufacturers, joined forces with more than 800 companies for a well-funded campaign designed to rally support for Ex-Im.

“Business owners are perplexed by the inside-the-Beltway campaign against Ex-Im,” chamber President Tom Donahue told reporters in a conference call yesterday, according to reports. “They don’t understand why Washington is threatening to let the bank’s charter lapse. And, frankly, neither do we.”

Chamber officials barred The Daily Signal, the multimedia news organization of The Heritage Foundation, from participating in the call.

Hensarling, a leading critic of the bank, would rather allow Ex-Im’s  charter to expire without any legislative action from his committee.

Besides Hensarling, lawmakers opposing the bank include Budget Committee Chairman Paul Ryan, R-Wis. Members of House leadership, many of whom joined with Democrats to reauthorize Ex-Im in 2012, have withdrawn or are hedging on their support.

Majority Whip Kevin McCarthy, soon to be the House’s No. 2 Republican as incoming majority leader, rattled the status quo Sunday when asked whether the bank should close. “Yes, because it’s something that the private sector can be able to do,” the Californian said.

Conference Chairman Cathy McMorris Rodgers, R-Wash.—the No. 4 Republican—told the Spokesman-Review she supports “a way forward” for her home state’s exports “while at the same time protecting taxpayer dollars.”

Louisiana’s Steve Scalise, elected by colleagues last week to succeed  McCarthy as majority whip, also has spoken out against Ex-Im.

Hensarling’s fellow conservatives had feared House leadership would bypass the Financial Services Committee and bring legislation extending the life of Ex-Im directly to the floor, as occurred in February with a flood insurance bill.

As informal debate over the bank flared on Capitol Hill, however, Speaker John Boehner, R-Ohio, and Majority Leader Eric Cantor, R-Va., assured the GOP conference that they would defer to Hensarling and the committee.

More than 40 Republicans, including New York’s Pete King and California’s John Campbell, chairman of the Monetary Policy and Trade subcommittee, yesterday sent a letter to Boehner and McCarthy urging reauthorization of the bank for several more years. They wrote:

Given our nation’s fragile economic recovery, we must continue to promote U.S. exports and create American jobs and not disadvantage U.S. manufacturers in a competitive market. This is a program that generates not only exports and jobs, but also much needed revenue for the federal government.

The Chamber of Commerce and the National Association of Manufacturers  contend Ex-Im is crucial to helping small businesses remain competitive in the global market. They say small and medium businesses account for 90 percent of transactions. And the bank, they say, is a good deal for taxpayers.

But Diane Katz, a research fellow in regulatory policy at The Heritage Foundation, writes that Ex-Im programs operate at a deficit that will cost taxpayers $2 billion in addition to operating costs over the next decade. In a new commentary, Katz argues that Ex-Im is a bastion of mismanagement, dysfunction and risk.

A Heritage Foundation review of government documents determined there have been more than 74 cases of fraud and corruption at Ex-Im since 2009. Katz points to several examples:

An examination of Ex-Im fraud cases reveals a disturbing pattern of carelessness in doling out taxpayer subsidies. For example, the bank approved 96 loan transactions in a two-year period for Gangland USA, which purported to export electronics from Miami to South America. According to prosecutors, company owner Jose L. Quijano received more than $3.6 million in fraudulent loans from the bank.

Similarly, the bank approved 18 loans involving $13.6 million to Leopoldo Parra, who pleaded guilty in 2012 to wire fraud and conspiracy to commit money laundering. According to prosecutors, Parra and his co-conspirators fraudulently obtained the loan proceeds and used them for personal gain.

Katz’s observations come on the heels of a Wall Street Journal report that four Ex-Im officials were suspended or fired amid allegations that they received gifts and kickbacks in exchange for financing exports or improperly awarded contracts to favored companies.

Holler said these reports are likely to play a role in today’s hearing.

“There’s going to be a focus on the cronyism element, and it’s going to be more than just hypothetical now,” the Heritage Action spokesman said. “There’s concrete evidence that this has gone on.”

Should Congress decide not to reauthorize Ex-Im and to allow its charter to expire, sources said, the Treasury Department could take over the agency. If that occurred, the bank would continue to oversee existing loans but lack the authority to enter into new contracts.

Technically, officials could issue loans until Sept. 30 if the bank’s $120 billion lending cap allowed, but it already has hit the limit.

The Export-Import Bank is a reliable way for American business—including many small businesses—to sell their goods and services into the world marketplace. If we abandon this resource, we are allowing China, Russia, and European countries to gain ground in export deals previously made with us—the economic equivalent of forfeiting in the World Cup when we know we have the best team.

The Democrat-led Senate could act on Lee’s legislation and, given the timing—the bank’s charter runs out Sept. 30, at the end of the federal fiscal year—force another government “shutdown” if the House refuses to extend Ex-Im by attaching the extension to legislation to fund the government.

“We do not believe the government will again shut down on Oct. 1,” Chris Krueger, an analyst at Guggenheim Securities, wrote. “But if House Republicans make a serious effort to close Ex-Im, it is conceivable that Senate Majority Leader [Harry] Reid and the White House could line up an FY15 [continuing resolution] with an Ex-Im Bank reauthorization, and we return to a game of chicken in late September just like last year (just replace Ex-Im with Obamacare)—only this time it is right before the midterm elections.”