Ignore the Pundits. 2014 Isn’t About Tea Party vs. the Establishment. 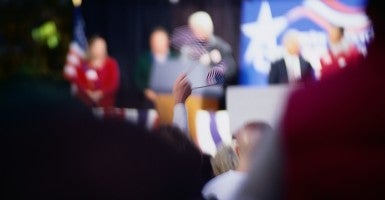 A majority of Americans, regardless of which pollster asks the question, say the country is on the wrong track.

And as polls close in the eight states holding primaries today, there will be plenty of prognosticating as to what the latest election results tell us.

The media likely will continue its obsession with tea party vs. establishment candidates in Republican primaries. We’re told the establishment won in Kentucky and North Carolina, the tea party in Nebraska and Texas, and in Georgia … well, it depends on who you talk to.

And those who just can’t wait for 2016 will see which potential presidential contenders saw their endorsed candidates win, and which didn’t.

As with most elections, there is a lot at stake. But the most crucial outcome of Election Day 2104 isn’t related to the tea party, or to would-be presidential nominees. Instead, what matters most is whether we end up with enough lawmakers in Congress willing to reign in the increasingly imperial Obama presidency in his final two years.

The Obama administration’s complete breakdown in enforcing our immigration laws is causing havoc on the border. Obama’s recent moves to go around Congress, whether it be altering wage laws for federal contractors or imposing climate rules via the Environmental Protection Agency, are assaults on the very things the majority of voters say they care about most—jobs and the economy. And this is nothing new. Whether it is waiving work requirements in welfare laws or delaying implementation of various parts of Obamacare or First Lady Michelle Obama’s crusade to take over school lunches, this is an administration that believes it knows better than the public, and the elected officials they’ve sent to Washington to represent them, how Americans should run their daily lives.

Until there are enough lawmakers in the House and Senate to put a stop to this continual presidential overreach, the “I have a phone and pen” presidency will continue unabated. The EPA decision to further limit carbon emissions announced by Obama this week shows he has no plans to let up during his final two years on his original campaign promise to “fundamentally transform the United States of America.”

Nov. 4 is about putting the brakes on such arrogance that has resulted in an over-regulated and debt-ridden country with no control over its own borders.

Join us on Thursday for the Daily Signal’s Google+ Hangout!

What do you think are the most pressing issues facing the country in 2014?  Join us for our first Daily Signal Google+ Hangout this Thursday LIVE at 2 p.m.,EDT.  I’ll be talking with Heritage Foundation President Jim DeMint along with a number of Heritage research experts about the week’s top policy and political issues – and we’d love to hear from you.  Please send me your questions and comments via Twitter @genevievewood all this week and we’ll make them part of our discussion on Thursday. Again, tune in or the Daily Signal Google+ Hangout this Thursday LIVE at 2 p.m. ET!