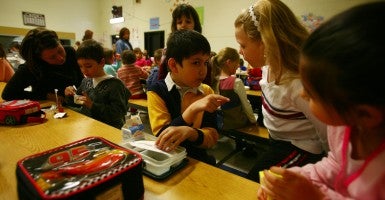 “Well, who you gonna believe, me or your own eyes?”  This Marx Brothers quote from “Duck Soup” is effectively the mantra of the Obama Administration when it comes to the USDA’s new School Lunch and Breakfast Program requirements implementing the Healthy, Hunger-Free Kids Act of 2010 — requirements that likely wouldn’t even allow duck soup.

The independent Government Accountability Office (GAO) published in January a report with results from a survey of nutrition officials who oversee the school lunch program covering every state and the District of Columbia. Officials from an incredible 48 states indicated that plate waste was a challenge for at least some of their local school food authorities (SFAs) in making the lunch changes.  Food costs and menu planning were right behind, cited by 47 states’ officials.

From the 2010-11 to 2012-13 school years, participation in the school lunch program declined by about 1.2 million students. This is after more than a decade of growth. The 2012-13 school year accounted for almost the entire decline, with 1.1 million fewer students participating in the program the first year that schools were required to comply with the standards.

Students across the country are disgusted by the food. According to the GAO, students in one district held a 3-week boycott against school lunch. In a Pittsburgh suburb, students organized lunch strikes.  Students are posting pictures of the food and using social media to vent their anger, such as tweeting using the hashtag #ThanksMichelle.

In response to these major concerns, the Obama Administration isn’t listening but is actually going after the messengers.  They can’t be bothered by the problems outlined in an independent GAO report, or by professionals in the field, school districts, parents, and students. Michelle Obama is ready to battle and apparently calling out anyone as playing politics if they disagree with her.

There’s a provision in the House agriculture appropriations bill that would grant waivers to school food authorities who are suffering financial losses due to operating food service programs. The waivers would give those SFAs an exemption from complying with the requirements for the 2014-15 school year.  This might help some schools temporarily, including those who have reportedly taken money out of their teaching budgets to cover the additional program costs.

Sam Kass, who is the administration’s Senior Policy Advisor for Nutrition Policy, framed this minor reprieve for some schools as an absolute catastrophe. According to Obama Foodorama, a blog covering White House food policy, “’What the House Republicans have proposed will be absolutely devastating,’ Kass said, and painted a grim picture of the junk food free-for-all that could go on, saying schools will be filled with ‘chips and candy bars, and all kinds of unhealthy foods.’”

Apparently, if it weren’t for Michelle Obama and the administration, American children would be going back to the old days of 2011 when there was a junk food free-for-all.  Only through federal intervention will kids eat properly as determined by the DC technocrats (because parents and local school officials are incompetent).

The administration and Michelle Obama may want to defend their program requirements at all costs, but that blind allegiance to these flawed new standards is what will really weaken the school meal programs. To strengthen them, important problems such as food waste, increased food costs, federal micromanagement, declining participation, and other issues need to be addressed.

The only thing that should matter is whether the meal programs are working to meet the needs of students, not the needs of the Obama Administration.