Eat Your Veggies (or Throw Them Away): The Disastrous School Nutrition Standards 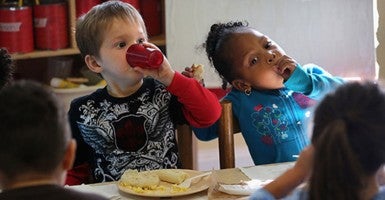 Leave it to the federal government to create school lunch standards that make kids want to throw out food more than eat it.

The U.S. Department of Agriculture’s new School Lunch and Breakfast Program standards have been a complete failure—as a result, Congress needs to take action so schools aren’t forced to comply with these costly and intrusive federal requirements to participate in these programs.

According to a January, 2014 GAO report:

The experience of school districts that have decided to leave the program is illuminating. For example, the superintendent of the Waterford, Wis., school district explained that “students complained about taste, portions are not big enough for athletes and dollars get wasted on fruits and vegetables that students must take but often are thrown away.”

In Township High School District 214, a suburban Chicago district that includes Arlington Heights, Ill., “[a] district spokesperson said the new school lunch guidelines are too restrictive; for example, not allowing kids to buy hard-boiled eggs or certain yogurts. School officials also have noted the new guidelines consider hummus to be too high in fat, and pretzels to be too high in salt; non-fat milk containers larger than 12 ounces could not be sold either.”

The School Nutrition Association (SNA), which represents the professionals who provide meals to students across the country, isn’t happy with the standards either. The SNA has “been calling on Congress to provide flexibility under the school food standards to help increase student consumption of healthy choices available while limiting waste.”

In response to this mess, the House Appropriations Committee has included in its agriculture appropriations bill a provision that would require the USDA to create a waiver process whereby some schools would not have to comply with these new requirements for the 2014-15 school year (Section 739 of the bill). This provision, which SNA supports, is a good first step toward addressing the fatal flaws of the new program standards.

Not everyone agrees, though, including First Lady Michelle Obama. On Monday, she promised advocates on a private conference call that she would fight efforts to weaken the standards.

A waiver process is the least Congress can do to address this problem. Ultimately, it needs to revisit the Healthy, Hunger-Free Kids Act of 2010—the legislation that underlies these standards.

Kids don’t want to eat the food provided. The new standards have created massive food waste, increased food costs and federal micromanagement. Therefore, changes are in order—changes that provide much greater flexibility and reflect the reality that parents, not the government, know what’s best for their children.