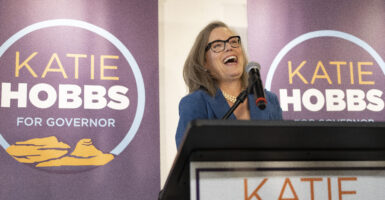 Two days after the Arizona Republican Party requested an investigation, the state’s GOP attorney general isn’t saying whether his office will look into specific actions of Gov.-elect Katie Hobbs, a Democrat.

Hobbs, Arizona’s outgoing secretary of state, flagged certain tweets last year in her official capacity that Twitter then removed. Her interaction with Twitter was revealed in court documents released in a lawsuit brought by Missouri and Louisiana alleging collusion between the Biden administration and social media companies such as Twitter.

“Two days ago, a bombshell dropped that Arizona Secretary of State Katie Hobbs pressured Twitter to remove posts while she was running for governor of Arizona,” Arizona Republican Party Chairwoman Kelli Ward wrote in a Dec. 6 letter to Arizona Attorney General Mark Brnovich, a Republican.

“Yesterday, the same Katie Hobbs certified her own election and crowned herself governor following weeks of countless testimonies of voter disenfranchisement from poll workers and poll observers,” Ward wrote.

Ward said Brnovich should “immediately investigate the secretary of state over a government agency directing a private company, Twitter, to suppress free speech.”

The state GOP alleges the communication with Twitter was a violation of the First Amendment as well as federal and state law. A federal statute, 18 U.S. Code § 241, prohibits two or more people from agreeing to “injure, threaten, or intimidate” someone else from exercising his or her constitutional rights.

Hobbs narrowly defeated Republican Kari Lake, 59.3% to 49.7%, with a margin of about 7,116 votes, according to The Associated Press. Her inauguration as governor is set for Jan. 5.

“It appears Secretary Hobbs, acting in her official capacity, using state resources, and at times in coordination with the Biden administration, asked Twitter to remove posts on her behalf,” Ward’s letter to Brnovich says. “It was at this point that she may have crossed the line into unlawful coordination.”

Brnovich’s office did not respond Thursday to several email and phone inquiries from The Daily Signal.

A two-term attorney general, Brnovich’s time in that office will come to an end Jan. 5. In another close Arizona race in an election fraught with controversy, the election for state attorney general remains undecided; a recount is expected to be completed by Dec. 31.

Brnovich has tackled issues involving Big Tech in the past. In 2020, his office sued Google, alleging that it illegally tracked the locations of users.

The emails revealed in court documents show that Hobbs’ office asked the nonprofit Center for Information Security to review two tweets posted by a Twitter account that had fewer than two dozen followers.

An email from the Arizona Secretary of State’s Office dated Jan. 7, 2021, a day after the riot at the U.S. Capitol, said of the flagged tweets: “These messages falsely assert that the Voter Registration System is owned and operated by foreign actors. This is an attempt to further undermine confidence in the election institution in Arizona.”

The Center for Information Security contacted Twitter, which removed both tweets.

The Arizona GOP also argues that Hobbs may have violated a state statute, 16-922, that says an act or expense is not allowed when there is “coordination with respect to an expenditure between a candidate or candidate’s agent and the person making the expenditure or that person’s agent.”

Because the email came from an “@azsos.gov” internet domain, Hobbs’ office, state Republicans allege this could be a violation of another statute, 16-192, prohibiting state offices, equipment, computer hardware, or telecommunications from being used to influence an election.

Ward’s letter to the state attorney general claims that it could be an unreported in-kind contribution under a third state statute, 16-1022.

The matter came to light because of a lawsuit filed by two other state attorneys general.

Missouri’s Eric Schmitt and Louisiana’s General Jeff Landry, both Republicans, filed a case called Missouri v. Biden in the U.S. District Court for the Western District of Louisiana. The suit alleges that the Biden administration violated the First Amendment by directing social media companies to censor speech about COVID-19.

The suit also led to the recent release of a deposition from FBI agent Elvis Chan regarding FBI involvement with social media companies in the 2020 election, as well as a deposition from Anthony Fauci, director of the National Institutes of Allergy and Infectious Diseases.