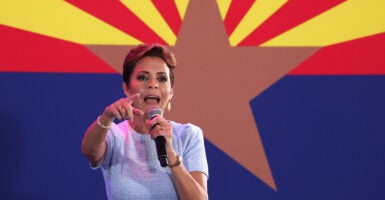 Arizona Republican gubernatorial candidate Kari Lake—seen here at a campaign rally on Nov. 5 in Scottsdale, Ariz., three days before Election Day—continues to insist, despite currently trailing in the vote count, that she will win when all the smoke clears. (Photo: Justin Sullivan/Getty Images)

If Arizona is genuinely interested in enacting much-needed state election reforms—and it should be, especially after this month’s voting debacle in Maricopa County, the state’s largest—it’s now or never. Or at least for the next four or eight years.

Term-limited outgoing Arizona Gov. Doug Ducey, a Republican, should call a lame-duck special session of the Legislature for the sole purpose of enacting voting reforms before the presumptive governor-elect, Democrat Katie Hobbs, can take office on Jan. 2—after which it definitely won’t get done.

(Hobbs leads her Republican opponent, Kari Lake, by 0.6 of 1%, or 17,150 votes, out of more than 2.55 million counted. The race has been called by the news media in the Democrat’s favor, but Lake has yet to concede.)

“The way they run elections in Maricopa County is worse than in banana republics around this world,” Lake was quoted as saying by London’s Daily Mail newspaper, adding: “I believe at the end of the day that this will be turned around.”

The Daily Mail reported that Arizona Assistant Attorney General Jennifer Wright on Nov. 19 wrote to one of Maricopa County’s top election officials “detailing reports of a string of irregularities from printer problems that stopped ballots being tabulated, to confusion about procedures for transferring voters to alternate sites if they were unable to vote at the first location.”

All of this comes on the heels of a Nov. 7 report in The Epoch Times that “19,000 late, invalid ballots were counted” in Maricopa County in the 2020 election.

Gov. Ron DeSantis of Florida—where there were none of the problems Arizona experienced, despite having an electorate three times the size of Arizona’s—could provide the Grand Canyon State with model election-reform legislative language to adapt for its needs.

Any election-reform legislative package should include some combination of the following:

These types of commonsense election reforms don’t prevent any eligible individuals from voting.

No doubt Democrats (and the liberal media) will howl, but so what? They’d be the first to demand reforms if the situation were reversed.

As for doing this in a lame-duck session, it’s no different than what we’re seeing in Washington, where congressional Democrats are trying to ram through codification of same-sex marriage and other left-wing legislation now, while they still control the House.

There’s no filibuster in the Arizona state Senate, which Republicans narrowly control, so Democrats wouldn’t be able to block the election reforms, assuming all Republicans were onboard.

The GOP messaging should be that the election reforms are necessary to avoid future repeats of the Maricopa fiasco.

“[W]e are going to restore honesty to our elections,” Lake, who continues to insist she will win, vowed to The Daily Mail.

But unless Lake does in fact prevail, the window of opportunity for restoring electoral integrity will soon close, so Republicans in the Arizona Legislature need to act expeditiously—and unapologetically—to make those changes, leaving it easy to vote but making it harder to cheat.