Arizona Races Too Close to Call Heading Into Wednesday 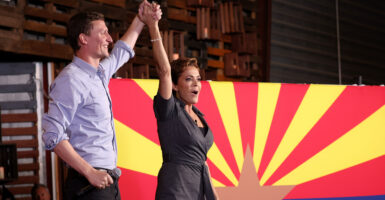 Two closely-watched races in Arizona have yet to be called.

GOP candidates Blake Masters for Senate and Kari Lake for governor had sparked hopes among conservatives predicting a “red wave” in the midterm elections, but as the evening progressed on Tuesday, results remained elusive. For much of the evening Democratic gubernatorial candidate Katie Hobbs and Democratic senatorial candidate Mark Kelly were leading, but Lake and Masters pulled closer in the wee hours of the morning.

The election has been punctuated by quick-spreading reports that some ballot scanners were not reading ballots, Politico reported. Election officials said that about 20% of the 200 Maricopa County polling places had at least one malfunctioning tabulator.

High-profile Republicans, including former President Donald Trump and his son Donald Trump Jr., urged voters to remain in line at faulty voting locations rather than traveling to another polling location and risking losing their vote.

“If you have already *checked in* at a Maricopa County voting location where the tabulators do not work, you should *not* leave and go to another location without casting a vote,” Lake urged voters. “Your provisional ballot at the new location likely will not count.”

“If you have already checked in at a Maricopa County voting location where the tabulators do not work, you can (1) wait for your ballot to be tabulated on site, (2) ask to use the handicapped voting machine, or (3) leave your ballot in a box to be counted later.”

The Masters and Lake campaigns filed an emergency lawsuit Tuesday in conjunction with the Republican National Committee and the National Republican Senatorial Committee to keep the polls in Maricopa County open three hours longer until 10 p.m., according to Politico.

The lawsuit alleged that election officials were off with their calculations, and that 36% of the voting centers had problems burdening “voters with excessive delays and long lines.”

Maricopa County Superior Court Judge Timothy Ryan rejected that lawsuit on Tuesday evening, saying minutes before polling places were about to close, “The court does not have any evidence that there was a voter who was precluded the right to vote.”