‘Jeopardizes the Basic Religious Liberties’: 7 House Republicans Who Changed Their Minds on Respect for Marriage Act 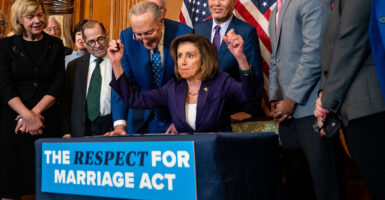 House Speaker Nancy Pelosi participates in a bill enrollment ceremony alongside Senate Majority Leader Chuck Schumer and a bipartisan group of Senators and Members of the House of Representatives for the so-called Respect For Marriage Act in the Rayburn Room of the U.S. Capitol Building. (Photo: Kent Nishimura/Los Angeles Times/Getty Images)

The Respect for Marriage Act will likely soon be signed into law by President Joe Biden after the House of Representatives gave its final approval on Thursday.

The bill passed 258-169, with every Democrat voting in its favor as well as 39 Republicans. One hundred and sixty-nine Republicans voted against the bill with one voting “present” and four not voting, The Daily Signal previously reported.

The Daily Signal contacted all seven House Republicans for a comment explaining why they changed their votes. Some of the congressional offices directed The Daily Signal to remarks made earlier in the day or earlier this week.

“What is our job here? Our job … we’re going to take an oath in a couple of weeks here, really outlining our job, supporting and defending the Constitution of the United States of America against all enemies, foreign and domestic,” Mast said.

Meuser expressed his disappointment with the Senate in a statement on Thursday.

“I am a long-standing supporter of upholding our nation’s promise of personal and religious freedoms. It is unfortunate that the Senate missed a critical opportunity to affirm the current law by passing the House version of the ‘Respect for Marriage Act,'” Meuser said.

“The Senate version, unlike the original House version, includes language that puts religious freedoms in jeopardy and opens up organizations to civil suits,” Meuser added.

Therefore, I cannot support the Senate Amendment to the Respect for Marriage Act because it jeopardizes the basic religious liberties of every American.

Salazar said she was “disappointed” by the final House version of the bill.

“I am disappointed to see the final House version of the Respect for Marriage Act did not include full protections for churches and Americans with sincerely held religious beliefs,” Salazar said in a statement on Thursday.

“I voted for the first version of the bill because I believe in human dignity and respect for all individuals. However, we cannot pass laws that advance one interest and bypass long-held legal protections for others,” Salazar said.

Unfortunately, Senate Republicans were prevented from including vital protections for religious Americans in the version that passed, including the Rubio and Lee Amendments. We must uphold the rights of all Americans and protect our religions institutions and faith community.

Van Drew explained why he could not support the bill in a statement.

“I am a supportive of a bill that would strictly codify the Supreme Court decision in Obergefell. However, while changes in the Senate to add religious protections were well intentioned, it failed to ensure that all religious organizations would be protected from provisions in this bill,” Van Drew said.

“The bill creates a specific protected class that failed to include religious charities, foster agencies, and educational facilities, which puts them in danger of litigation. Therefore, I could not support this final version,” the New Jersey congressman said.

In a statement earlier this week, Diaz-Balart also explained why he could not support the final passage of the Respect for Marriage Act.

“The concept of all states respecting other states’ decisions on marriage laws is deeply rooted in American jurisprudence and tradition. Similarly, our Founders understood that religious liberties are sacred and vulnerable, and must always be vigorously protected,” Diaz-Balart tweeted on Monday.

My record shows that I am a long-standing advocate against discrimination of all types.

I, however, cannot support any effort that undermines religious liberties by failing to provide legitimate safeguards for Faith-Based organizations that object based on their deeply-held religious beliefs.

Jessica Anderson, executive director of Heritage Action for America, applauded the seven Republican members of Congress for their decision.

“House members rarely get the opportunity to shift their votes on major pieces of legislation, but the Respect for Marriage Act was a unique exception. We applaud the seven conservative members who used this second chance to shift their votes and oppose this legislation and its attacks on religious liberty,” Anderson said in an emailed statement to The Daily Signal. (The Daily Signal is the news outlet of The Heritage Foundation.)

“The growing opposition to this legislation further underscores the difference that conservative groups and grassroots activists can make in Washington. The Heritage Foundation and Heritage Action will not stop fighting alongside the American people to protect religious liberty and our foundational freedoms,” Anderson said.

Here are the Republicans who voted for the bill, according to preliminary reports. Most also voted for it in July, but some did not:

Perry and Bentz did not immediately respond to The Daily Signal’s request for comment.

Mary Margaret Olohan, Gillian Richards, Virginia Allen, and Tyler O’Neil contributed to this report. This article may be updated.