Those Who Disagree on Marriage Can Coexist. For the Sake of Our Society, We Must. 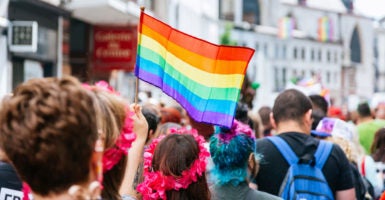 The evolving public definition of marriage has threatened to marginalize groups that hold to the traditional definition. (Photo: iStock Photos)

In 2015, a majority of the Supreme Court in Obergefell v. Hodges wrote that the view that marriage is exclusively between one man and one woman is “based on decent and honorable religious or philosophical premises.”

Yet increasingly, the traditional view of marriage is being equated with anti-LGBT bigotry—and not without consequences.

Take what happened this month at Georgetown University, the nation’s oldest Catholic university, when two students filed a complaint against a student-led group, Love Saxa.

The complaint called upon the administration to strip Love Saxa of university recognition and its $250 in activity funds. They claimed Love Saxa violated university rules that make groups ineligible for university benefits if they “foster hatred or intolerance of others because of their race, nationality, gender, religion, or sexual preference[.]”

According to its Facebook page, Love Saxa “exists to promote healthy relationships on campus through cultivating a proper understanding of sex, gender, marriage, and family among Georgetown students.” The group defines marriage as between one man and one woman.

According to Chad Gasman, the president of GU Pride, a pro-LGBTQ student group at Georgetown:

When they deny certain individuals who are queer access to this ideal standard of a relationship, they immediately say that all queer relationships are not as valid as heterosexual relationships. They also specifically call homosexuality and any non-heterosexual view a distorted view of human sexuality which is directly homophobic.

Ultimately, the student-run Student Activities Commission voted 8 to 4 not to impose sanctions on Love Saxa, after which Gasman stated that Love Saxa “advocates for traditional marriage and against queer marriage and queer lives” and that “[u]ltimately, we’re being forced to pay for people who hate us.”

But according to Love Saxa’s president, Amelia Irvine, these accusations of hatred and intolerance do not hold any weight.

“We are coming at this issue from a position of love and one of respect for the individual and one that views human sexuality as a gift that should be taken very seriously,” Amelia told The Daily Signal in an interview at the annual Love and Fidelity Network conference.

Love Saxa was not the first club of its kind to face challenges for its stance on marriage and human sexuality. The Daily Signal also spoke with Jim Martinson, the student leader for Students for Child-Oriented Policy, a student club at another Catholic university, Notre Dame University.

According to its website, Students for Child-Oriented Policy “advocate for the development and implementation of child-oriented policies that respect the soundest understanding of the principles of universal human reason, especially on the issues of marriage, education, adoption, drug abuse, and pornography.”

“Our founding was a little controversial,” Martinson explained. “We started out not as an officially affiliated university club. It took us a little while to be recognized because there was some backlash. People thought we were an anti-LGBT group, which was obviously not the case, we’re pro-marriage.”

As Martinson and Gasman’s remarks show, two main points are at stake in these controversies: first, whether the belief that marriage is between one man and one woman is inherently opposed to love and compassion for LGBT individuals, and second, whether views deemed “bigoted” should be tolerated.

In the examples so far, institutions have ruled in favor of free speech and withheld punishment—some might even say in favor of tolerance.

But that may not remain the case if these conflicts go the way of a larger phenomenon in the U.S.—the weaponization of antidiscrimination policies against those who hold a traditional view of marriage.

From bakers, florists, and other creative professionals whose religious beliefs prevent them from supporting same-sex marriage through their creative crafts, to adoption agencies forced to close their doors for holding that children deserve a mother and a father, more and more Americans are being forced to choose between public life and their beliefs.

This imposition of sexual orthodoxy by the government sets a dangerous precedent that should concern all Americans, regardless of their views on marriage.

“If we can be punished just for expressing our ideas and our beliefs, that’s really going to open the Pandora’s box to any group with a controversial idea,” Irvine stated. “If someone else can just say, ‘Oh, your group is hateful because I feel oppressed by that idea,’ then no group on campus is safe.”

It doesn’t have to be this way. Just as Americans with widely different opinions learned to coexist after Roe v. Wade by keeping the public square open for debate and providing conscience protections to health care professionals with objections to abortion, a similar solution exists here.

Post-Obergefell, Americans should be free to disagree on marriage and to live according to their consciences.

In fact, one of America’s greatest strengths is how our tradition of pluralism allows us to hold different beliefs and simultaneously live together in peace.

Although the Student Activities Commission at Georgetown decided in favor of a plurality of opinion, this conflict may not be over. Jasmin Ouseph, one of the complainants against Love Saxa, has indicated that she intends to appeal the commission’s decision.

In the event that Love Saxa’s ordeal continues, we should recall that there is nothing inherently hateful or intolerant about believing marriage is between one man and one woman, as the Supreme Court acknowledged in Obergefell.

Instead, citizens of good will on both sides of the issue should resolve to protect each other’s First Amendment freedoms, that makes possible public discourse, both on campus and in the nation at large.