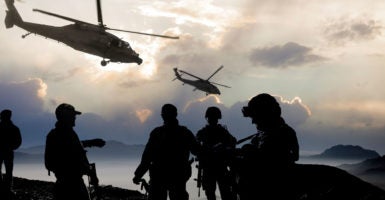 "The military is no longer a place of diversity and inclusion if you are a person who holds to a traditional belief on marriage," First Liberty Institute's Michael Berry says. (Photo: iStock Photos)

After flying in the B-2 bomber, Air Force Col. Leland Bohannon knows a thing or two about stealth. And the attack against his faith isn’t it. In fact, the military seems to be going out of its way to punish the Christian dad of five, despite a distinguished career defending the same freedom the Air Force is intent on taking from him.

Like a lot of service members, Bohannon was relieved when President Donald Trump signed the executive order protecting religious freedom. But that same May, he found out the hard way that not everyone in the military had gotten the memo. Instead of encouraging faith, Air Force officials were continuing the Obama policy of punishing it.

The controversy started when someone approached Bohannon about signing a “certificate of spouse appreciation” for an airman in a same-sex marriage. A devoted Christian, Bohannon couldn’t, in good conscience, celebrate a relationship that violated biblical truth. After talking with the command chaplain and a staff judge advocate, he asked for a religious accommodation.

Six weeks passed. The Air Force responded to his request by doing nothing. The accommodation letter was returned without an answer, leaving Bohannon completely defenseless in what had become a major flare-up with his superiors.

After the airman complained to the Equal Opportunity Office, investigators took on the case, ultimately accusing Bohannon of “unlawful discrimination on the basis of his sexual orientation.” To most people’s surprise, officials didn’t care if Bohannon had gotten an exception. Even if the “accommodation been granted,” they wrote, “Colonel Bohannon would nonetheless be guilty of unlawful discrimination.”

The colonel was stunned. Not as stunned as he would be in the coming weeks, when he was suspended, given a poor performance appraisal, and virtually guaranteed that he would never be promoted again. For Bohannon, who is a decorated combat officer, the news was devastating.

“His career is likely over,” First Liberty Institute’s Michael Berry told Fox News’ Todd Starnes, “and he will likely have to retire as a colonel instead of a general.”

Berry, who’s representing Bohannon in the case, could only shake his head. “This sends a clear message—if you do not have the politically correct viewpoint, you are not welcome in the military. The military is no longer a place of diversity and inclusion if you are a person who holds to a traditional belief on marriage.”

Unfortunately for people like Bohannon, religious hostility in the military didn’t disappear when President Barack Obama did. There are still plenty of bureaucrats and political appointees determined to carry on the intolerant legacy of the last eight years. That will be harder to do now, under a commander in chief like Trump. But, even with a new president, it takes time to identify and uproot the problem areas in a department of almost 3 million people.

[The DOJ’s religious freedom] memorandum relies on current law—the First Amendment, the Religious Freedom Restoration Act (RFRA), and Department of Defense Instruction (DODI) 1300.17—which all protect religious freedom in the military, and thus protect Col Bohannon. Indeed, DODI 1300.17 requires an accommodation to be granted unless a military interest overrides it. All of these authorities clearly require the government to protect Col Bohannon’s religious freedom by not forcing him to personally sign the certificate.

What better way to celebrate Veterans Day than correcting this wrong to service members’ rights? With our friends at First Liberty Institute, we call on the military to make it clear through their own guidance that service members are free to exercise the same liberties they’re fighting for. Join 17,000 others who’ve signed our petition to Air Force Secretary Heather Wilson on behalf of Bohannon—and every Christian brave enough to wear the uniform.

Then, check out Family Research Council’s Lt. Gen. Jerry Boykin as he shares his unique perspective on Veterans Day in this CBN interview.