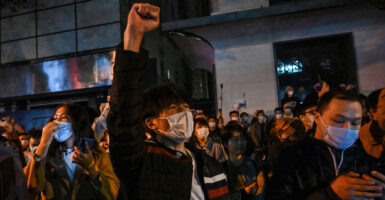 People sing while gathering on a street in Shanghai on Nov. 27, where protests against China's zero-Covid policy took place the night before following a deadly fire in Urumqi, the capital of the Xinjiang region. (Photo: Hector Retamal/AFP/Getty Images)

Many in Western media once praised China’s response to the pandemic, which began in the city of Wuhan. That’s looking absurd now as the nation plunges into dysfunction and chaos.

Not only has COVID-19 infection escalated dramatically in China, but the Communist government’s entire model of dealing with it appears to have failed. The country is now trapped in a cycle of outbreak and repression that has shut down cities and large parts of its economy.

As the third anniversary of the Covid outbreak nears, China is reporting record infections. The daily highs are surpassing April’s surge in Shanghai, which shut down for two months. Outbreaks are occurring across China, and cities are again imposing lockdowns. Nomura, the Japanese brokerage, estimates that more than a fifth of the country is under restricted movement.

The article noted that China’s “latest breakout was inevitable in a large continental nation given the increasing transmissibility of the virus as it mutates.” By pursuing the zero-COVID approach, China has effectively decided to peel off the Band-Aid slowly. Even more disastrously, they are opening more wounds daily.

This is what happens under an authoritarian regime that has no ability to bend or respond to public opinion. Terrible policies continue until a society reaches a breaking point.

It appears that many Chinese citizens have reached that breaking point. The protests that have rocked the country are the largest since the Tiananmen Square incident in 1989.

What’s notable about the repression taking place in China is not just its brutality, but also its absurdity. State authorities are so insistent on maintaining the failed zero-COVID policy that they are willing to let many people die to keep up the appearance that it is good and necessary. They need their people to believe that they were right from day one.

Expect no mea culpa or dramatic retreat from China’s authoritarian leaders. They aren’t into that sort of thing. Right now, they’re doubling down. Armies of men in white, plastic suits march the streets yelling at people to stay in their homes while they beat and arrest those who don’t comply.

Massive, rather concentrated-looking quarantine camps are being constructed outside major cities.

Given the growing protests and arrests, it’s no stretch to think that these camps aren’t exactly being built for health purposes.

People are literally being welded into their homes. They are told that the government will provide food and basic medical services, but that help often never comes, so they starve and die. Some even burned to death because they were sealed in their homes.

This apartment fire, which took place in the city of Urumqi and in which people burned to death because they could not escape, sparked the protests.

Florida Gov. Ron DeSantis, who was at the forefront of opposition to tyrannical and wrongheaded zero-COVID policies, called China’s actions “draconian, unscientific” and a “gross violation of individual rights.”

China may eventually loosen the grip on some of their more absurd policies, but who knows where all this might lead? One way or another this is an important moment, and not just in China. There were plenty here in the West who wanted something like China’s zero-COVID policies.

Far-left columnist Arthur Chu pined on Twitter at the height of the pandemic for Chinese military occupation in the U.S. Well, I guess we are getting a small glimpse of what that would be like, just not in America.

But it wasn’t just a few unhinged leftists on Twitter dreaming about CCP-style control of American society to address the pandemic—and undoubtedly many other issues, as well.

Corporate media outlets like CNN, The Washington Post, and The New York Times openly praised China’s COVID-19 response and declared the Middle Kingdom the “winner” of the pandemic in 2021.

In one piece titled “Power, Patriotism and 1.4 Billion People: How China Beat the Virus and Roared Back,”—yes, that was the actual headline—four New York Times writers heaped praise on China, telling readers about the “success” of zero-COVID policies and the regime’s ability to enforce them.

“In the year since the coronavirus began its march around the world, China has done what many other countries would not or could not do,” the team of New York Times writers exclaimed. “With equal measures of coercion and persuasion, it has mobilized its vast Communist Party apparatus to reach deep into the private sector and the broader population, in what the country’s leader, Xi Jinping, has called a ‘people’s war’ against the pandemic–and won.”

No, the people lost.

Public health officials jumped in on China’s total lockdown strategy, too, and sometimes openly gushed about the authoritarian regime’s ability to control its own population.

In February 2020, the World Health Organization heaped praise on China’s government for its COVID response, saying in a report that “China has rolled out perhaps the most ambitious, agile and aggressive disease containment effort in history.”

WHO praised China’s “exceptional” adherence to containing the virus spread, and claimed it has “only been possible due to the deep commitment of the Chinese people to collective action in the face of this common threat.”

Perhaps that’s true. But given the level of civil discord now seen in the country, alongside the ruthless response to even the mildest levels of defiance to irrational policies, it seems that kind of “collective” response—at the point of a gun—had a cost.

Don’t forget that bureaucrats, politicians, and the current president of the United States did their best to enforce draconian mandates and lockdowns on the American people. They did this as corporate media shamed dissenters and Big Tech suppressed alternative views to the official narrative of how we would beat the pandemic.

Left-wing and corporate media outlets may now be reporting on how obviously terrible China’s COVID crackdowns are, but where were they when Canadian truckers were being demonized and repressed by their government? Where were they when Australia was opening up disturbing quarantine facilities?

How about when President Joe Biden tried to foist an unconstitutional vaccine mandate? Or how about when countless Americans lost their jobs because of similar mandates in states and cities?

Those who opposed mandates and lockdowns were treated unsympathetically at best.

Heck, even now there are left-wing journalists who continue to voice support for zero-COVID policies, despite their obvious failure.

They just can’t give it up.

The smarter ones will try to pretend what happened didn’t happen or try to create a firm line of distinction between China’s policies and what they wanted to implement here. But the only reason our outcomes were better is because few brave leaders decided to take a wiser course than the one being foisted on us by the scientific-technocratic elite.

It was also because we, especially in the United States, often rebelled against petty tyrannies and therefore gave ourselves a chance to prevent a greater one. Since there is still some amount of federalism in this country–a trait progressives have despised for generations–many states rejected the most extreme demands of the lock-downers.

That directly prevented bad policy in some states and indirectly put pressure on the more ridiculous ones to moderate their position.

What’s happening in China today is an example of what could have been and could still be in the West. The protests in response to extreme repression will hopefully lead to something brighter for the people of China, who for too long have lived under the heel of jackbooted tyrants.

This needs to be a moment of reflection for us too. We must not forget how many–especially among the “expert” managerial class–wanted to take us down a similar dark path.