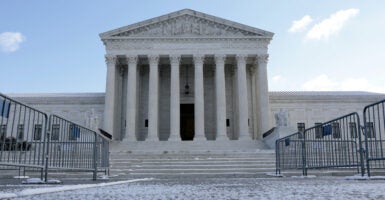 The Supreme Court on Thursday struck down the Biden administration’s COVID-19 vaccine mandate for private companies and other organizations with at least 100 employees.

In a separate case, however, the high court did allow vaccine mandates for employees of federally funded health care facilities.

In the main case, the majority of justices expressed doubt that the federal Occupational Safety and Health Administration, which is part of the Labor Department, has the legal authority to impose an emergency regulation to implement a vaccine mandate.

They accordingly possess only the authority that Congress has provided. The [Labor Department] secretary has ordered 84 million Americans to either obtain a COVID-19 vaccine or undergo weekly medical testing at their own expense. This is no ‘everyday exercise of federal power.’ … The question, then, is whether the [Occupational Safety and Health] Act plainly authorizes the secretary’s mandate. It does not. The act empowers the secretary to set workplace safety standards, not broad public health measures.

The high court heard arguments Friday on the OSHA rule, which was supposed to go into effect this week before being halted pending court action. The new rule required employees either to get fully vaccinated or be tested for COVID-19 on a weekly basis.

The justices ruled 6-3 to strike down the vaccine mandate for many private employers and 5-4 to let stand the mandate for health care workers.

She added that many employers have imposed vaccine requirements without being told to do it by the government.

Health care facilities that receive Medicaid and Medicare funds are still subject to a separate Department of Health and Human Services vaccine requirement based on their receipt of federal funds.

Only Chief Justice John G. Roberts and Justice Brett M. Kavanaugh were in the majority for both decisions, The Washington Post reported, meaning that they were the only conservatives to uphold the mandate for health care workers.

The mandate for health care workers covers about 17 million people.

The White House had said the mandate for private employers would have covered more than 80 million Americans.

Numerous businesses, nonprofit organizations, and 27 Republican-led states sued to halt the Biden administration’s vaccine mandate on private employers. The Heritage Foundation, parent organization of The Daily Signal, was among the plaintiffs challenging the mandate.

Lower courts were divided on the issue.

President Joe Biden, well before announcing the vaccine mandate for larger private employers, had said he didn’t believe such a federal requirement would be constitutional without the involvement of Congress.

But the Biden administration eventually argued that the Occupational Safety and Health Act gave OSHA the authority to impose emergency temporary standards for workplace safety without going through the sometimes lengthy process of regulatory approval.

However, private employers and the complaining states argued that the vaccine mandate was federal overreach. They said it didn’t comply with the federal statute that requires that any emergency temporary standard must show that employees face a “grave danger,” that the rule is necessary to protect employees from such danger, and that the rule is feasible for employers to implement.

Heritage, the nation’s leading conservative think tank, was represented before the Supreme Court by the American Center for Law and Justice.

“The federal government has no business dictating the private and personal health care decisions of tens of millions of Americans, nor does it have the authority to coerce employers into collecting protected health care data on their employees,” Heritage Foundation President Kevin Roberts said in a formal statement, adding:

By striking down the Biden regime’s unlawful COVID-19 vaccine mandate, the Supreme Court has signaled its agreement with this basic tenet of a well-functioning and free society.

This mandate has never been about public health. It has always been a fig leaf for President Biden’s excuse to increase government control of the everyday lives of Americans.

This report was updated within two hours of publication to correct the court’s vote on the mandate for health care workers.