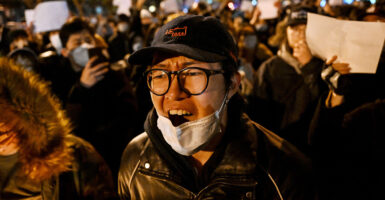 "I'm just really worried. I don't know if they can get enough food," Chen, an attendee at Monday night's vigil in Washington, said of people under strict COVID-19 lockdowns in China. Pictured: Demonstrators in Beijing rally Monday in memory of the victims of a fire in Urumqi, China, and in protest of China's pandemic restrictions. (Photo: Noel Celis/AFP/Getty Images)

A candlelight vigil was held Monday night at George Washington University’s Kogan Plaza in Washington, D.C., to honor the victims of the China’s coercive “zero-COVID” policy.

An apartment building fire on Nov. 24 killed at least 10 people and injured at least nine others, ultimately triggering days of both national and global protests against the communist regime in Beijing.

Physical barriers that were built “as part of pandemic-control efforts” and abandoned cars belonging to people in quarantine were said to have prevented fire engines from reaching the apartment building, The Hill reported.

One attendee at Monday’s vigil told The Daily Signal his family is under lockdown in China.

“My other families, they’re all back in China. They’re in Benxi City in Northeast China,” said Chen, who did not provide his full name. “All of them have just been placed under lockdown, as of [Sunday].”

Another attendee, Yen, who did not provide his full name, said he was born and raised in Shanghai, and spoke about standing up and supporting his friends and family who are in China.

“Obviously, this is my hometown, and when you see people fighting for freedom, fighting for a better future in your own hometown, you have to stand up and support them,” Yen said.

“We just have to show not only our family, our friends back home, but the world that nobody … nobody messes with Shanghai. You know, we’re the strongest city in China,” he said.

“On WeChat, I see a lot of people who are normally apolitical or even supportive of the government come out and turn against it, or I guess, in a way,” Yen said. WeChat is China’s most popular messaging app.

Annabelle, who was interviewed with Yen and also did not provide her full name, said her dad’s family is still in China, as are her grandparents, who she said are “currently under lockdown, too.”

Another attendee, named Tahir Imin, said that he is from Urumqi, China, where the fatal fire occurred, and that his ex-wife and daughter still live there.

If anyone back home [communicates] with the people overseas, they might be considered as a spy for foreign agents, so their lives would be in danger.

So, I just hope people would stand up, say the truth, and try to do anything [to] hold China accountable.