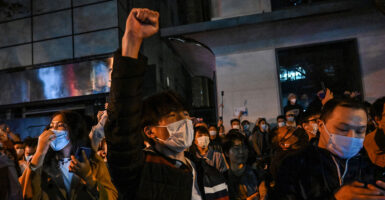 "It was really sparked by the fire in Urumqi," says Michael Cunningham of The Heritage Foundation. Pictured: People sing slogans while gathering on a street in Shanghai on Nov. 27, 2022, where protests against China's zero-COVID-19 policy took place the night before following a deadly fire in Urumqi, the capital of the Xinjiang region. (Photo: Hector Retamal/AFP/Getty Images)

Protests swept across China over the weekend in response to the nation’s “zero-COVID” policy and an apartment fire in Urumqi that killed 10 people, The Associated Press reported.

“It was really sparked by the fire in Urumqi. So, China has sort of a practice in its ‘zero-COVID’ policy of when it locks down cities or buildings. Lots of times it’ll erect barricades or sometimes even lock or weld people inside,” Michael Cunningham, a research fellow at The Heritage Foundation, told The Daily Signal in an interview. (The Daily Signal is Heritage’s multimedia news organization.)

“And so we’re not sure if any of that happened, but there’s a public perception that that was probably the case, and that that’s one of the reasons why so many people died in that fire,” Cunningham said. “Now, what was surprising about it, though, was that protests just erupted.”

Here are some photos documenting the historic protests throughout the communist nation and the world: