Time for G-20 to End Empty, Diplomatic Theater and Act 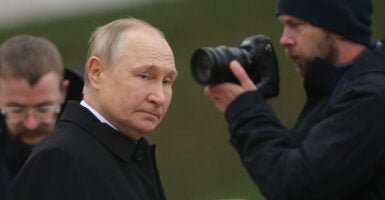 No immediate task is more important for this week’s meeting of the world’s leading affluent nations than acting with unity to reconstruct Ukraine and revitalize the global economy.

The Leaders’ Summit of the Group of Twenty nations, or G-20, will take place Tuesday and Wednesday, hosted in Bali by Indonesian President Joko Widodo.

This year’s G-20 summit is billed as a political and economic forum where leaders of the world’s 20 largest industrialized and emerging economies gather to discuss core international issues. Too often, though, G-20 summits produce little more than empty, diplomatic, photo-op theater.

If the G-20 cannot summon the courage to make meaningful decisions, it will prove itself irrelevant to world affairs.

Unambiguously, 2022 has turned out to be the most consequential year in geopolitics since the end of the Cold War three decades ago. Russia’s unprovoked second invasion of Ukraine on Feb. 24 brought greater urgency to the need for serious, practical cooperation between the United States and like-minded countries in meeting the demands of this new era of conflict.

Russia and China both pose grave, wide-ranging challenges and threats. Their cooperation necessitates reinforcing and amplifying the strength of America and its allies more than ever.

Kevin Roberts, president of The Heritage Foundation, the parent organization of The Daily Signal, pointed out:

America has clear national security and economic interests in a Europe that is stable and secure. Providing military resources to the people of Ukraine in their fight against Russia’s brutal invasion is a worthy cause that also advances those interests.

Those interests are shared by other countries, and should be furthered by continuing to supply weapons to Ukraine and strengthening economic sanctions against Russia.

Ukrainians are willing and capable of fighting for themselves, with a strong consensus that a free, thriving, and secure Ukraine and a rebuffed Russia benefit the interests of America and its allies.

Russian President Vladimir Putin will not attend this week’s G-20 summit, however. In fact, division over Russia’s war in Ukraine regrettably lingers, as shown during the July meeting of G-20 foreign ministers, where western nations pushed for language supporting Ukraine while India, China, Indonesia, and Brazil resisted.

It is notable that the United States downgraded Russia to a nonmarket economy Thursday, revoking its decision to grant Russia market economy status in 2002, an essential step for Russia’s admission in 2012 to the World Trade Organization. Unambiguously, Putin’s kleptocracy bears no resemblance to a market economy.

Indeed, Russia’s invasion of Ukraine and challenges from China have shown that economic freedom buttressed by transparency and accountability matters more than ever.

The Heritage Foundation’s annual Index of Economic Freedom, along with other indices, long has documented the importance of good economic governance. It is critical economic growth and prosperity, which in turn generate more opportunities and greater economic security.

Not surprisingly, Russia and China are unfree economies, according to Heritage’s index.

Free countries are prosperous due to robust, market-based economic governance. Economic freedom is also the key ingredient in enhancing food security as well as effectively breaking down climate and environmental challenges into important, meaningful, and manageable issues.

To say the least, this week’s G-20 leaders’ summit should not be business as usual. G-20 needs a freedom and prosperity agenda more than ever, not diplomatic photo-ops.