How America Can Outperform China in Critical Diplomacy Competition 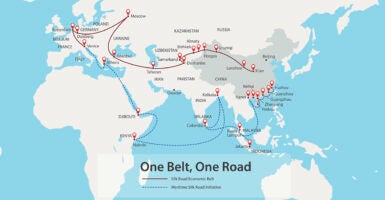 We are in a new era of geopolitical competition where China and the U.S. each attempt to win allies through battles of strategic diplomacy, but where the U.S. is falling behind. Pictured: “One Belt, One Road” chart map for Chinese strategic investment in the 21st century. (Photo illustration: Hakule, iStock/Getty Images)

Rodney Rios is a member of the Young Leaders Program at The Heritage Foundation.

For some time after the end of the Cold War in 1989, it was common to think that the world had entered a new era in which great power competition would be a thing of the past. But instead, the world has entered a new era of geopolitical competition between states—an era where competitors like the U.S. and China each attempt to win vital allies to their side through battles of strategic diplomacy, and one where the U.S. is regrettably falling behind.

As the Biden administration’s latest national security strategy makes clear, the coming years will be critical for deciding which nation will lead the international order. Of all the countries in the world, the only one that can effectively challenge the United States for global leadership is the People’s Republic of China. To protect America’s national interests, policymakers in Washington must be aware of the nature and scope of the challenges from Beijing.

It has become unambiguous that China is the most capable adversary the United States is currently facing. It is under the absolute control of the Chinese Communist Party, which is devious, cruel, and predatory. Its military and economic capacity and calculated willingness to challenge America and its allies around the world on almost all strategic fronts constitute a threat of unprecedented proportions.

In particular, as Politico explained in a recent special report, currently, regrettably, the United States no longer claims an advantage in diplomatic terms compared to China, and it is more pronounced when it comes to developing countries.

As the report explains, the disadvantage is somewhat the result of U.S. disengagement in some regions, a deemphasis on the trade and investment element of diplomacy, a dearth in the confirmation of ambassadors, and a failure to focus strategic assistance on areas that the developing world prioritizes.

Regarding that last element, American support focuses on “providing technical assistance to governments on everything from education to fighting corruption,” according to the report. That support is beneficial, but infrastructure projects, which China prioritizes, are more valued.

As is well documented, China, for its part, doesn’t care about human rights and how a regime it works with comes to power. China merely claims to want to do business and presents its economic development model for lifting people out of poverty without free market democracy as more effective and beneficial than the U.S. model.

China has been expanding its diplomatic staff and presence around the world. In addition, China focuses on helping these developing countries with projects such as its Belt and Road Initiative, which is China’s ambitious geoeconomic connectivity initiative. This massive infrastructure project would stretch from East Asia to Europe.

This economic largesse has boosted China’s diplomatic advantages compared to the United States. However, Belt and Road have yet to be an absolute success. China has had to rein in the program as countries have grown increasingly wary of participating in it.

The overall challenges from China on various policy fronts are still unnerving for the U.S. Yet the United States can and must win the geopolitical, diplomatic competition. As Heritage Foundation’s Vice President for Foreign Policy James Carafano succinctly underscored in “In a New Kind of War, the Old Wars of Ideas Are Back,” which highlights the importance of winning the critical battle of ideas, “We can’t win without being proactive.”

To that end, there needs to be a greater emphasis on improving our foreign service. For instance, there should be a drive to recruit more experts and diplomatic staff that understand Latin America and Africa, so they can effectively represent American interests in those regions.

From a broader perspective, a key element of soft yet effective diplomatic power is pragmatic economic engagements. America will help itself and the world more if it moves from handing out aid to creating real partnerships. To that end, for instance, the International Development Finance Corporation needs to be more strategic. This development agency helps finance overseas infrastructure and other projects so that America can compete with infrastructure development, but it needs to be better focused.

Last but not least, the United States needs to reassess its priorities. Instead of propagating far-left goals in its foreign policy, such as promoting abortion, the U.S. must focus on its national interests and develop a plan to achieve its goals. These sorts of policies, while pleasing to the left side of the political spectrum, divert scarce diplomatic capital from advancing core U.S. interests and undermine diplomatic relations with more conservative nations.

It should be remembered that the United States now faces a different China from a decade ago. The emboldened leadership in Beijing has become increasingly aggressive, and in many ways, is a threat to America, its interests, and its role in the world.

There is still time for America to counter China’s malign and manipulative influence, but that window is quickly closing.