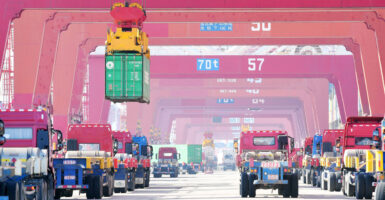 When China entered the World Trade Organization in 2001, it allowed millions of Chinese to escape abject poverty. Pictured: Containers are seen at the Port of Qingdao on Dec. 7 in Qingdao, Shandong Province of China. (Photo: Yu Fangping/VCG/Getty Images)

China celebrated its 20th anniversary of being admitted to the World Trade Organization on Dec. 11. While the mission of the WTO is to ensure that world trade is as smooth, predictable, and free as possible, today’s China remains economically and politically unfree.

As BBC’s economics editor pointed out,

China’s admission to the World Trade Organization changed the game for America, Europe and most of Asia…The promise, suggested by the likes of former US President Bill Clinton, was that “importing one of democracy’s most cherished values, economic freedom,” would enable the world’s most populous nation to follow the path of political freedom too. “When individuals have the power not just to dream, but to realize their dreams, they will demand a greater say,” he said. But that strategy failed.

Pascal Lamy, the European Union trade commissioner at the time of China’s accession and former WTO director-general from 2005 to 2013, stated that China’s accession was a “defining moment” for the WTO and the multilateral trading system, which required China’s “political intelligence, technical knowledge and, of course, a good (accession) team.”

However, he further suggested that, going forward, China needs to do more by fulfilling its “commitment in the WTO.”

Entry into the World Trade Organization in 2001 further opened China’s market to foreign trade and investment, enabling China to lift millions more out of abject poverty and give a greater number of Chinese citizens access to a better quality of life and leisure.

China has often paid lip service to reforming its bloated, inefficient, state-owned enterprises and command economic structure. Unfortunately, recently announced reforms have rarely panned out, with pro-market reforms slowed and even derailed in some sectors.

According to the Index of Economic Freedom, the Chinese economy remains a mostly unfree country with weak property rights and a protectionist financial system. China’s economic freedom has marginally grown over the past few decades, but at a snail’s pace. The Chinese economy remains “mostly unfree” and stands as the 107th-freest (out of 179) in the 2021 index, lagging behind the majority of other countries in maximizing opportunities for greater economic dynamism.

The U.S. now faces a different China from a decade ago. The emboldened leadership in Beijing has become increasingly aggressive, and in many ways, it is a threat to America, its interests, and its role in the world… With greater transparency on Chinese issues, the U.S. can create policies to keep the [Chinese Communist Party] in check, to neutralize its various threats, and to build a better future for America, for the world, and perhaps even for the Chinese people.

The Daily Signal is the news and commentary platform of The Heritage Foundation.

Without any further delay, Washington must better, more realistically understand China’s economy and expose its grave lack of transparency and accountability, particularly as U.S. policymakers and other like-minded partners around the world focus on the challenges China poses more than ever. Countering China’s growing illiberalism must continue to be a priority for Congress and the administration.

To that end, the WTO needs to be a necessary, renewed tool with which the U.S. and its like-minded and willing partners must better utilize in dealing with China.