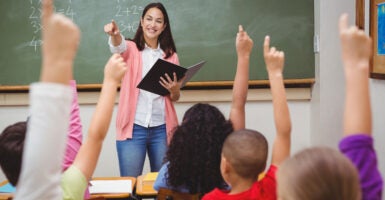 Well-run schools, where students behave and are educated and not indoctrinated, were once the norm, and could be again. The author of "Dead Last," a retired principal, cites his own firsthand example. (Credit: Wavebreak Media/iStock/Getty Images)

Stephen Wallis is a retired nationally recognized school principal and author of the book “Dead Last: The Triumph of Character, Passion, and Teamwork in Education.”

Among the most important aspects of our constitutional republic is education—specifically, how we teach our nation’s youngsters.

Is it possible that we can save our country’s K-12 schools? The short answer is an unequivocal “no,” if we were to continue what is standard fare today.

However, it doesn’t have to be that way, as I make abundantly clear in my book “Dead Last: The Triumph of Character, Passion, and Teamwork in Education.”

Many students excel academically and go through school gaining meaningful and nurturing experiences, participating in an array of extracurricular activities. However, as the greater majority of students matriculate through school, they do less well each year in key academic areas, continually lagging behind their counterparts in other developed nations.

As a school principal, I often remarked to colleagues that our business model for doing things was not sustainable—not then and not today.

One might think that those adults charged with the education of our youngsters would be all about improving poor student behavior that teaching staff find so disruptive, as well as about shoring up academic deficiencies with proven instructional interventions that would bolster quality teaching and student academic performance, support first-rate teachers, cultivate an appreciation for academic rigor, and emphasize the important role that parents play in the education of their children.

But if you thought that, you would be wrong.

In fact, benighted lawmakers, school officials, and classroom activists posing as teachers have doubled down on their bent for dumbing down education throughout our land. They’ve elected to saddle our youngsters with rampant woke indoctrination, radical gender ideology, critical race theory (that historians on both sides of the aisle have deemed a lie), and left-wing activism.

It’s a nonsensical and dangerous movement, and their claims are false. Such divisive claptrap and the attendant identity politics are injurious to our youngsters and their families. It steals meaningful time and attention away from the academic lessons students need in reading, writing, mathematics, science, history, and additional academic and related arts disciplines.

In those school districts that have bowed to activist pressure, school leadership has been replaced with advocacy. They willingly elect to sow seeds of division, and they do so with utter disregard for facts, dignity, family, and country.

“Dead Last,” on the other hand, clarifies how character, grit, traditional values, respect, and a no-nonsense attitude trump the typical education orthodoxy of appeasement, identity politics, and excuses.

The book is written through the prism of my having taken the helm of an in-crisis, failing school in the Baltimore-Washington corridor, one with all the pathologies associated with such schools: disruptive, frequently violent student behavior; widespread bullying and thievery; failing district and state student academic test scores; low teaching staff morale; racial concerns; and parents’ and community leaders’ abject exasperation.

Fast-forward four years, and the same school is touted nationally for its teaching excellence, successful student academic achievement, and shared partnership with parents and the wider community.

Given the horrid condition of this failing school community—not unlike many others across America—how was such a transformation remotely possible?

I needed teachers who knew their subject well and could teach. I wasn’t having insecure classroom activists who wanted to be their students’ friends. Students had enough friends. What they needed were role models, professionals who meaningfully cared about youngsters and their future success.

They would come to understand the meaning of merit, excellence, hard work, and perseverance. We would become a professional learning community. It required that every classroom be viewed as sacrosanct. They began to think about the importance of character; specifically, that when character is the soul of one’s school, where meaningful teaching and learning are rooted in truth and historical fact, that’s the surest route to scholastic success and an informed patriotism.

We should want our students to feel academically accomplished, with a host of extracurricular experiences, to possess a love of family, to have compassion for one another, and to carry with them an abiding respect for an evermore United States of America.

Those hellbent on pushing diversity, social engineering, and equity in our schools do so at the expense of perspective, honesty, historical accuracy, and rigor. They refuse to recognize that stable, two-parent families, educational attainment, workforce participation, and the resultant economic prosperity account for the majority of observed racial differences.

Focusing valuable human and financial resources on wokeness and anti-intellectualism is precisely the opposite of what should be taking place in our schools. Such decision-making is dereliction of duty and shows a complete lack of understanding of what education is, and of the high expectations and self-discipline required to attain it.

Those who spread such venomous hatred have no business being within 500 feet of a school, much less actively involved in the education of our country’s youngsters.

Americans must reject the nonsense that passes for much of education today.

The same could be replicated throughout the country, from South Central Los Angeles to Boise, Idaho; from Baltimore to Boston; and from Lansing, Michigan, to New Orleans.

To continue operating schools as we do currently is to risk losing a generation of children, and we do so at our own peril.