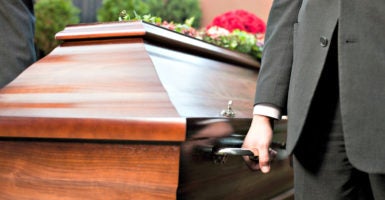 When it comes to issues of sexual morality and identity, the Obama administration’s rule is that sexual autonomy always must win over religious liberty, even at funerals and gravesites. (Photo: iStock Photos)

When families lose loved ones, they often seek out funeral homes for solace and comfort and, for people of faith, spiritual consolation as well.  At such a delicate time, the last thing grieving families expect is a debate over whether male funeral home employees should be allowed to dress like women at their loved one’s funeral.

But that is exactly the conflict President Barack Obama’s Equal Employment Opportunity Commission set in motion when it sued Thomas Rost.

As a matter of faith, Rost, the owner of three funeral homes in Michigan, required his male and female employees to dress in keeping with the solemnity and sensitivity of funerals and burials.

The conflict started when one of Rost’s male funeral directors stated in writing that he needed to be treated like a woman by others and informed Rost that from now on he would wear skirts while representing the funeral home, which included attendance at funerals.

Rost respectfully dismissed the funeral director, not because of who the employee was or anything he did outside work, but because Rost’s religious beliefs did not allow him to actively affirm a false sexual identity, or to have his business be the cause of distress and offense to mourners at their most vulnerable moments.

Rost, however, did not count on the political power of the lesbian, gay, bisexual, and transgender agenda pushed by LGBT advocates and the Obama administration.

After the employee complained to the EEOC, the Obama administration sued Rost’s family funeral business, demanding that his employees be allowed to dress like the opposite sex whenever and wherever they wanted to, including at memorial services, or face damage awards and penalties.

Judge Sean F. Cox noted in his opinion that unless Rost violated his faith, the funeral home owner “would feel significant pressure to sell [the] business and give up [his] life’s calling of ministering to grieving people as a funeral home director and owner.”

No one should be put to such a choice.

Funeral homes seem like odd places for the Obama administration to take a stand against religious liberty. But similarly bad optics did not stop the administration from fighting the Little Sisters of the Poor, a Catholic order of nuns, all the way to the Supreme Court over Obamacare’s mandate that the order’s health plans cover abortion-inducing drugs.

It seems that when it comes to issues of sexual morality and identity—be it same-sex marriage, contraceptives, abortion, and now gender identity—the administration’s rule is that sexual autonomy must always win over religious liberty, even at church funerals and gravesites.

As my colleague Ryan T. Anderson and I have explained, the Obama administration has systematically misinterpreted bans on “sex discrimination” (both old and new) to mean “gender identity.”

From requiring male access to women’s and girls’ showers, dorms, and bathrooms in schools and universities, to regulating pronoun use in employment, to mandating sex reassignment surgeries under Obamacare, the administration has imposed a new gender ideology across the land with no basis in law and without the backing of the American people.

Obama’s policies insert the federal government into matters that are properly the domain of state and local authorities. They impose one-size-fits-all policies on the nation, they endanger privacy and safety, and they ignore the equality of all.

Parents, teachers, principals, hospitals, professionals, businesses and other employers, and local officials have been working out nuanced solutions that are respectful to all affected parties in this sensitive area. They should be allowed to continue to reach reasonable solutions without threats of lawsuits and funding cuts by the federal government.

Twenty-four states wisely have sued the administration over its threats, and a court in Texas has just ordered a halt to the administration’s ideologically driven attempt to rewrite the law unilaterally to include gender identity without congressional approval. The administration almost certainly will appeal and there is no guarantee as to the outcome, especially given a liberal-dominated judiciary.

This is why Congress can and should pass legislation to undo the confusion and harm unleashed by an overreaching executive branch and activist courts (stacked with liberal Obama appointees). That would be a major step toward restoring respect for the rule of law, federalism, and state, local, and private decision-making.

If passed, such a law would undo the Obama administration’s high-handedness and prevent future abuses of power by subsequent presidents and the courts.

Thomas Rost’s faith led him to dedicate his life to comforting and serving those who grieve. Because the Obama administration is likely to contest his victory on appeal, Rost and his life’s calling once again will be put in jeopardy by a steamrolling gender ideology that did not start, and will not stop, with funeral homes.

A law such as the Civil Rights Uniformity Act is needed now more than ever.