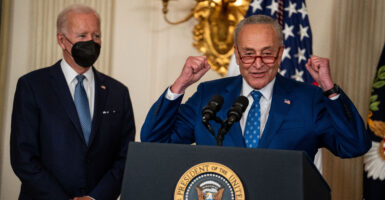 The shopping spree is a fun concept. The winner of a game show or sweepstakes gets five minutes to race through a store piling high a shopping cart with all the goodies they can get their hands on.

Inevitably, the prizewinner gravitates toward the big-ticket items to get the most bang for someone else’s buck.

Of course, watching a shopping spree is less fun if you’re the one footing the bill. It’s even worse when there are 535 “shoppers” haphazardly throwing $13 million worth of items into the shopping cart every minute.

Yet, that’s what Congress does with the taxpayer dollars taken from the Americans they represent. Instead of carefully deliberating on every dollar spent—as American families do to make the most of their limited budgets—Congress clears the shelves with little regard for the price.

It votes for omnibus spending packages that cost trillions of dollars and span thousands of pages without even having enough time to read what’s in the legislation.

It’s past time for Congress to start behaving like responsible stewards. Congress is entrusted to represent the interests of the American people and to spend taxpayer dollars as carefully as the taxpayers would themselves.

The Heritage Foundation’s Budget Blueprint envisions what responsible stewardship of taxpayer dollars could look like, laying out a 10-year federal budget with $15.5 trillion less piled into Congress’ shopping cart. That’s about $3 million per minute for those watching at home. (The Daily Signal is the news outlet of The Heritage Foundation.)

Many of the spending items that the Budget Blueprint would remove from Congress’ metaphorical shopping cart would save Americans not only from bad deals, but also from bad—even actively harmful—products.

That includes curtailing funding for global organizations that work against American interests, eliminating shipping regulations that drive up prices for American consumers, and cutting off federal dollars from left-wing institutions that undermine American values.

America’s fiscal situation is dire: The national debt stands at more than $230,000 per U.S. household. How did we get here? Our representatives in Congress are accountable to the people, so how do they get away with spending taxpayers’ hard-earned money so recklessly?

There are several ways members of Congress have fed the notion that government spending won’t cost you, the average taxpayer, anything.

Members of Congress have downplayed concerns about our increasingly unsustainable deficits and national debt. Some have even promoted the pseudoscientific Modern Monetary Theory, which suggests that the Federal Reserve can just print money to pay for multitrillion-dollar utopian socialist programs.

Americans suffering through inflation are experiencing for themselves the folly of this wishful thinking.

Instead of ignoring the debt problem, the Budget Blueprint shows how to balance the budget and bring down inflation in the process.

Left-wing members of Congress also have falsely claimed that the 1% of the richest Americans and “big corporations” can foot the bill for the leviathan government they are creating. Unfortunately for the left, there’s a math problem and an incentive problem with their approach.

First, the math problem: In 2021, federal government spending exceeded 30% of the economy, which is roughly $2.3 trillion more than the total amount of income earned by the top 1%.

Even if it were feasible to impose a 100% federal income tax—while ignoring all the state and local taxes they pay—there simply aren’t enough very wealthy individuals to shoulder the weight of all this spending.

While the rich directly pay most federal taxes now, there’s no way to tax your way out of a $30.8 trillion hole without smacking the middle class with big tax increases. Huge taxes on the middle class are the only way that European countries can remotely afford their high levels of spending.

The other problem with high taxation on investment, business, profits, and the wealthy is that it stops innovation, destroys businesses, and pushes more wealth and investment overseas or squashes it altogether.

Tax policy that drives away businesses, jobs, and opportunity only hurts working Americans and makes it that much harder to get out from under a mountain of debt.

The tax and fiscal policies in the Budget Blueprint, on the other hand, were designed to boost the economy. A strong and thriving economy would lift more and more Americans into the middle class and beyond, while easing inflation.

Modeling projects that the Budget Blueprint’s policies would create 6 million full-time jobs, permanently expand the economy by 6.2%, and increase the median worker’s after-tax wages by $2,200 per year.

The Budget Blueprint achieves that by offering several solutions to reduce the harmful practice of overtaxing investment, the lifeblood of sustained economic growth. It would extend expensing of capital investments, allowing companies to deduct capital investments as they’re made, instead of following convoluted, decadeslong depreciation schedules that allow inflation to eat into the value of any deduction.

Similarly, the Budget Blueprint would allow for the full recovery of investments in structures and end the research and development amortization tax disadvantage.

The Budget Blueprint would reduce tax rates on businesses and individuals. It would cut the corporate tax rate to 15%, making America one of the most attractive places in the world to do business, benefiting American workers in the process.

The Budget Blueprint would make permanent the individual Trump tax cuts of 2017, which benefited American households across the income spectrum. And it would reduce and simplify tax rates further, consolidating seven income-tax brackets into three.

At its heart, the Budget Blueprint is about trusting Americans to keep more of their own money. Is there any doubt that they’d spend and invest it more prudently than Congress?