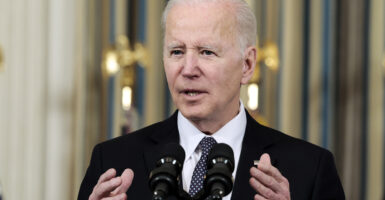 Joe Biden said he wouldn’t raise taxes on the middle class. But his huge, deficit-fueled spending is creating an indirect tax of 7.9% inflation and his new budget raises taxes on all working Americans. Pictured: President Joe Biden introduces his proposed 2023 budget at the White House, March 28, 2022. (Photo: Anna Moneymaker/Getty Images)

On the campaign trail, then-presidential candidate Joe Biden claimed dozens of times that the 98% of Americans earning less than $400,000 per year wouldn’t pay a penny more in taxes if he was elected. Apparently, the federal government could spend trillions more on a big government social agenda at no cost to the average American.

To some, that may sound like a great deal.

But if 15 months of the Biden presidency have taught us anything, it’s that nothing he promises is free.

In 2021, the Biden administration and Congress spent with reckless abandon, unnecessarily racking up $2.8 trillion of new debt. Although their attempts to directly raise taxes on working Americans were mostly blocked or stalled, their deficit-fueled spending contributed to an enormous indirect tax on all Americans in the form of 7.9% annual inflation.

The ravages of that inflation are far worse than “a penny more in taxes” for a retiree whose life savings are now worth 7.9% less. The indirect tax of inflation also hammered the average worker, whose average hourly earnings fell 2.6% last year relative to prices.

Last week, the White House released its 2023 budget, proposing $5.8 trillion of spending in the next fiscal year. That’s 31% more than the government brought in last year. The budget also includes a reserve fund in the event the Senate passes Biden’s bloated Build Back Better Act. That legislation would increase direct spending budget authority by an additional $860 billion just in the first year.

In short, Biden is doubling down on spending.

Despite the glut of proposed spending, Biden again gave his “ironclad promise that no one earning less than $400,000 per year would pay an additional penny in new taxes.”

However, his budget would allow the 2017 Trump tax cuts to expire, setting all working Americans up for a large tax increase in three short years. Tax rates would go up across the board.

Middle-class Americans should also be concerned about the impacts of Biden’s taxes that—on the surface—appear to be aimed at businesses and wealthy Americans. Taxes imposed on American businesses, for example, would drive up prices and reduce wages. As we’ve seen, one can pay dearly for government spending even if you don’t write a check directly to the government.

Biden’s budget proposes $2.5 trillion of new taxes over the next decade. On top of both the expired Trump tax cuts and the Build Back Better taxes in the budget baseline, that would give the United States the highest corporate income tax rate, the highest capital gains tax rate, and the highest top combined personal income tax rates among the 38 democracies in the Organization for Economic Cooperation and Development.

There’s simply no way everyday Americans wouldn’t feel the economic fallout from this level of taxation.

If new federal taxes pile onto the cost of investing or doing business in America, then fewer businesses will set up shop here. Those businesses that remain will have to manage with less funding. That means less production in America, less entrepreneurship and innovation, and fewer jobs.

Additionally, with fewer firms competing for their business, American consumers would be forced to buy inferior products at higher prices. At the same time, with taxes driving up the cost of doing businesses in America, companies would pay lower real wages to workers.

Counterintuitively, Biden is also proposing new taxes on capital gains at the same time the Federal Reserve is poised to hike interest rates to tame inflation. Those interest rate hikes will make it more difficult for businesses to attract investment dollars. And adding an additional 19.6% to the top capital gains tax rate would dry up business investments even further.

Worse still, Biden would even take the extreme step of taxing capital gains income before it’s earned. In addition to likely being unconstitutional, this would have the unfortunate effect of depriving capital from the businesses with the best investment opportunities.

As structured, the tax would target those with more limited cash income whose wealth is concentrated in the stock of a rapidly growing business. Perversely, Biden’s tax could force such individuals to pull funds out of high-growth businesses to pay the tax.

Consumers thrive when businesses engage in open and healthy competition and when financial markets allow investments to flow to the businesses with the best ideas. The taxes in Biden’s budget lead to precisely the opposite.

Finally, it’s important to remember that once the federal government has established a new tax, it can easily broaden the tax to apply directly to the middle class.

When Congress and the Woodrow Wilson administration established the first permanent personal income tax in 1913, it started as a 1% tax on people earning $3,000 or more—about four times the average income at the time—and topped out at 7% for individuals with $500,000 or more of income—the equivalent of well over $10 million in today’s dollars.

Within five years, the income tax applied to Americans below the average household income, and rates were much higher.

Likewise, let’s dispel any notion that the middle class can avoid directly paying for the spending addiction of the current Congress and administration.

Make no mistake. If this big government agenda is enacted, America’s middle class will pay for it one way or another.